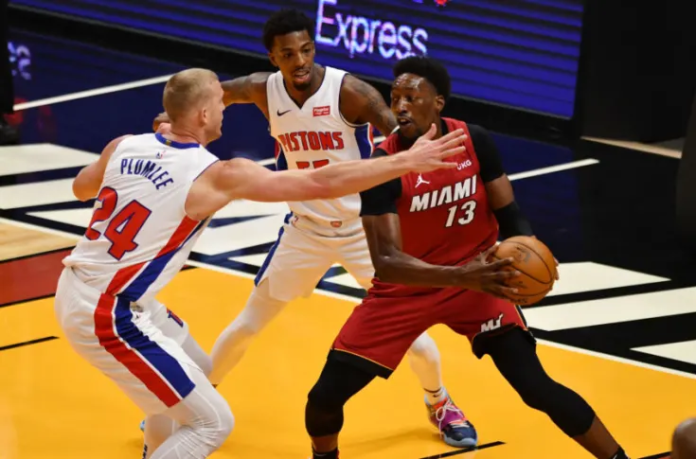 The Miami Heat are one of the few teams in the NBA that still take pride in its zone defense. But while it has been pretty successful, when Erik Spoelstra instructs his men to switch to it, it’s not a great sign as it’s typically used when the man-to-man defense isn’t producing results. Spoelstra also goes to the zone when one of the Heat’s better defensive players isn’t involved in a particular game.

“The zone is part of our system, but it just depends on what the game calls for,” the Heat head coach explained ahead of his team’s trip to the United Center to face the formidable Chicago Bulls. The Heat have been using the zone for extended periods as of late. They used it throughout a lengthy spell for the first time in a loss to the Los Angeles Clippers earlier this month, going into the second game of a back-to-back without Jimmy Butler. The forward was nursing an ankle injury.

Before that game, the Heat had only used the zone in three possessions, per Synergy Sports. However, they’ve used it quite often since then and, as of Friday, had the third-most zone defensive possessions in the league with 108. According to the source mentioned above, only the Orlando Magic and Charlotte Hornets had more. However, Miami’s man-to-man defense hasn’t been very steady in recent weeks.

“That’s something that we’re getting a little bit more confidence in,” Spoelstra said of the zone. “But our base defense, our foundational defense is our man-to-man. So when we’re at our best, our man is really doing his job.”

The three-time NBA champions have the fifth-best defensive rating in the league, allowing 104.3 points per 100 possessions yet, over the last ten games, rank at 15 as they’ve allowed 107 points per 100 possessions. Last season, they finished 13th on that front, right below the New York Knicks, who are 18th in defensive rating this term and, per New York sports betting, aren’t favored to be as loud as they were the last term.

Of course, they were without Bam Adebayo for two games due to a bruised knee. Butler also missed three games because of his sprained ankle, and Kyle Lowry rested for a game. Unfortunately, the numbers weren’t better for those absences.

The Miami Heat turned to the zone during a comeback victory against the Detroit Pistons on Tuesday night, and it was very effective as it limited the Pistons to 37 points on 37.2 percent shooting from the field in the second half after they’d scored 53 points on 46.3 percent shooting in the first half. The Pistons had scored 9-24 threes in the first period but only made 1 of 14 in the second.

“We had to go to it,” Spoelstra said after the game. “In the second quarter and the beginning of the third, they were chewing us up in our man. At that point, we got down double digits, and we went to it to try to change the tempo of the game.”

“We hopped in the zone for a reason,” center Dewayne Dedmon offered. To disrupt their offense and get us more possessions, so it worked out for us.”

Caleb Martin was used to playing zone in Charlotte but has already noticed the difference with Miami’s in his first season with the team, pointing out that Spo’s zone allows for more steals.

“I feel like we can be a little riskier up top, go for steals,” Martin claimed. “I think in Charlotte, we were a little bit more conservative. Here we want to push the tempo and be disruptive. So just try to speed them up.”

“Take away driving lanes and kind of force some teams to shoot the ball and see how comfortable they are shooting the three,” he said of the Heat’s goals when it comes to their zone defense. “It makes it easier on us definitely to rebound, too, because most of our guys are in the paint.”

“We still have a lot of defensive lapses,” Adebayo added. “I feel like we recover because we have a lot of intelligent players, and some of us are very athletic. We always rotate and cover for each other, so that’s why it looks like we are playing intense defense. But a lot of the time, we’re out there figuring it out.”

Another article you may enjoy: Moriah Jefferson, Using Basketball Fame To Help The Community