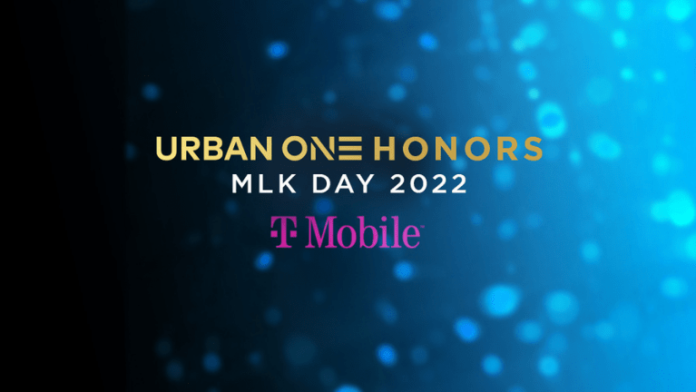 “At T-Mobile, we champion diversity by supporting Black innovators and elevating Black history year-round,” said Clint Odom, T-Mobile VP of Strategic Alliances and External Affairs. “We’re thrilled to celebrate Dr. King with Urban One Honors by honoring the music, the magic, and the soundtrack of Black America.”

URBAN ONE HONORS is presented by TV One and Radio One’s Washington D.C. market’s cluster of radio stations: Majic 102.3 and 92.7, WKYS 93.9, Praise 104.1, WOL 1450, Spirit 1340, and The Team 980 and 95.9. The televised event heralds the accomplishments of individuals who have made extraordinary contributions in entertainment, media, music, education, and the community.

Launched in January 2004, TV One serves 43 million households, offering a broad range of real-life and entertainment-focused original programming, classic series, movies, and music designed to entertain and inform a diverse audience of adult black viewers. The network represents the best in black culture, and entertainment with fan favorite shows Unsung, Uncensored, ATL Homicide, Fatal Attraction, and Urban One Honors. In addition, TV One is the cable home of original blockbuster films, including When Love Kills: The Falicia Blakely Story, Love Under New Management: The Miki Howard Story, Bobbi Kristina, and The Bobby DeBarge Story. TV One is solely owned by Urban One, Inc., formerly known as Radio One, Inc. [NASDAQ: UONE and UONEK, www.urban1.com], the largest African-American-owned multi-media company primarily targeting Black and urban audiences.

Related article: TV One’s Celebration of “Women Leading the Change” at the Annual Urban One Honors