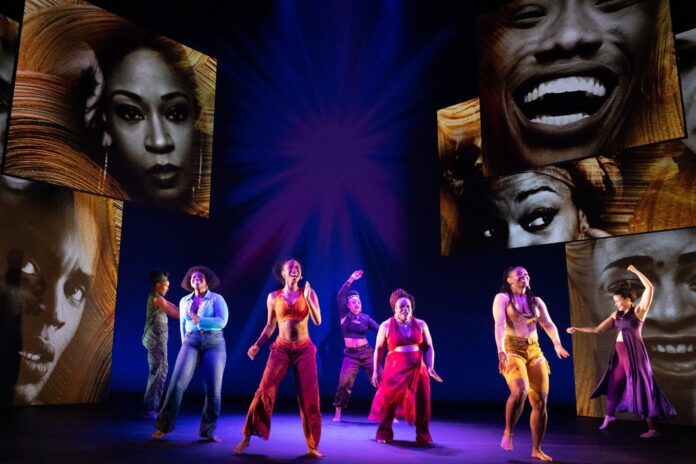 For Colored Girls Who Have Considered Suicide, When the Rainbow is Enuf by Ntozake Shange, opened on April 20th at the Booth Theater. It has been 50 years since For Colored Girls last run on Broadway at the same theater but gives the same jaw-dropping, fist-clenching emotions today. Tony Award nominee Camille Brown choreographed and directed this nostalgic play and also became the first Black woman to have these titles on Broadway.

Black women have been disregarded and unheard, ‘For Colored Girls Who Have Considered Suicide/When the Rainbow is Enuf‘ was a dedication to be shared and to be regarded. The For Colored Girls cast (Amara Granderson as “Lady in Orange”, Tendayi Kuumba “Lady in Brown”, Kenita R. Miller “Lady in Red”, Okwui Okpokwasili “Lady in Green”, Stacey Sargeant “Lady in Blue”, Alexandria Wailes “Lady in Purple”, and D. Woods “Lady in Yellow”) did amazing in depicting this rendition of a classic. D Woods broadway debut was breathtaking.

A comeback to Broadway moment provided by Ntozake Shange engaged the audience from beginning to end. The gasps from the actresses on stage to coincide with movements and situations kept the audience in awe as they were placed in those tender moments.

The power of words, breath, and movement dictated the emotions, situations, and feelings the women were displaying. The choreography and storytelling of each women gave different dynamics and perspectives for women to relate to. This story will never get old as different generations of women come across this amazing piece of work.

This continues to be relevant as Black women look to be recognized, supported and appreciated. Watching For Colored Girls is a reminder of what women of when women of color come together and provide each other healing in each other’s strengths by expressing and sharing their weaknesses. This is an artistic creation that deserves its run and support on Broadway.

Rising Fashion Designer Trenton Lavell on His Roots in the Fashion...