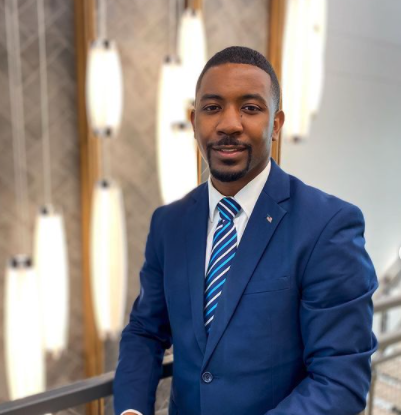 Last year, Chair Hendrell Remus made Tennessee history when he was elected as the first Black man or woman to be party chair. This election was an important and groundbreaking moment in Tennessee history, as well as Black history, and marks the beginning of a new age of acceptance and diversity in Tennessee politics. Chair Remus is determined to represent and share the values of the Democratic party for his state.

How do you feel, being the first Black person elected to the Tennessee party chair?

Being the first Black person to serve as Chair of our state party has significant historical implications for the direction of the Tennessee Democratic Party. In this role, I have an opportunity to first show that having a Black person at the helm of the party is not only long overdue but that not having more diverse leadership earlier may have kept us from excelling in ways unimaginable sooner.

Each day, with every interaction, I’m also keenly aware of the tremendous expectations that come with being the first. For me, not only am I representing the Democratic party, but I’m representing a race of people that have often been counted out and overlooked. I feel a sense of responsibility to show that not only can a Black person do this job well, but that Black leadership can also help to identify and access untapped potential in groups of people that may have been disconnected from the party and politics altogether.

However, sometimes I do feel as if I’m playing by a different set of rules than my predecessors, but I also know that I’m setting a new precedent for my successors. I feel that I’m the right person for this moment in our party’s history and I wake up every day focused on living up to the hype of being the first Black Tennessean to be elected Chair.

What issues do you feel most strongly about? What are you most wanting to do for your constituents?

I believe that voting rights have to be at the top of the list. Without expanding access to the ballot and protecting everyone’s right to choose their representatives, everything else becomes just a political wish list that may never become reality.

At the end of my term as Chair, I hope that people can look back and say we focused on everyday issues that impacted folks from every walk of life. That’s why I’ll be fighting to make sure that we elect leaders who will really double down on economic opportunity, education, and health care. There are many varying components of each of those issues that impact different segments of our communities.

However, we want to ensure that Tennessee workers are paid more than just the hourly $7.25 state minimum wage but a livable wage. One where they don’t have to hope for overtime just to ‌do more than pay their bills. But I also believe that small businesses and minority-owned businesses should not be overtaxed and should have access to capital so that they can thrive and grow.

I believe that our public education system has to be fully funded and that the focus shouldn’t just be on preparing students for annual tests, but on preparing them for a strong academic future. This means investing in strong vocational programs so that those students who don’t choose college can also graduate and begin a career with high wages and great benefits. It also means making sure that those young people who ‌choose college aren’t burdened with student loan debt as they matriculate and especially after they graduate. In Tennessee, we offer two years of free education at community colleges and technical schools, which should be expanded to also include four-year colleges and universities.

Last, the expansion of Medicaid in Tennessee could save the lives of nearly 400,000 uninsured Tennesseans. We should expand access to health care and work to infuse investments into community clinics while also investing in state-of-the-art health care centers on the campuses of colleges and universities across our state that will service faculty, staff, and students at no cost.

What is “get blue quick?” How can it be applied to Tennessee?

When I talk about “get blue quick” strategies, I’m usually referencing cities, states, and elections that are in swing territory that with the influx of staff and campaign finances, can be quickly flipped to a democrat. Unlike those districts, Tennessee has a tougher road ahead. It will take time to first bring voters back into the fold and ‌trim the margin in districts across our state. After trimming angina to make those districts more competitive, then that influx of staff and campaign finances will become effective. However, dwindling the margins may take multiple election cycles with proven consistent results.

Therefore, we’re setting the expectation that this will not happen overnight. It’s going to take a concerted effort, a ton of patience, and a strategy that’s designed to go the distance.

What are your ultimate goals for your political career? How are you working towards these goals?

Once that work is done, I will probably someday return to the same place I started my political journey, as a candidate for public office. I believe that public service is important and that those who make our laws will either set us on course for a future filled with progress or one that is stagnant and regressive. I want to be a part of building a more prosperous and productive future.

We are excited to follow the career of Chair Remus as he continues on his path to changing the political landscape of Tennessee. We admire his commitment and passion for American politics and Democratic values. To learn more about Chair Remus’ plans, click here!

Related article: Journalist and Author Nallely Pimentel Informs and Advocates for Her Community

The Social Worker Building Others’ Confidence During the Pandemic