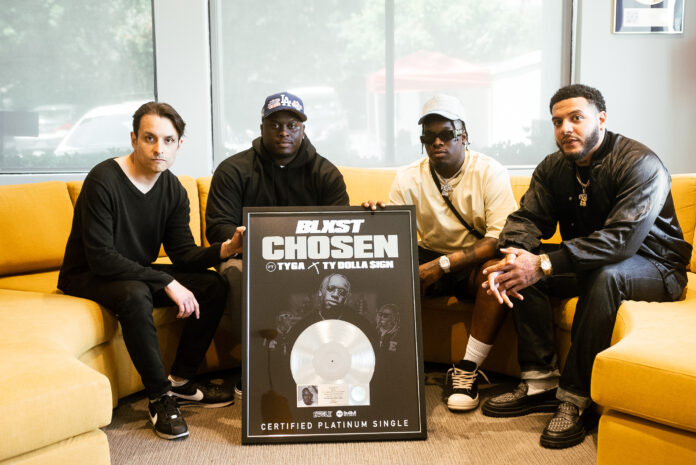 Released by Red Bull Records/Evgle LLC, “Chosen” reached #1 on Rhythmic and Urban radio and peaked at #21 on Top 40 radio. The song was a breakout single of the past year, breaking into the Billboard Hot 100and, peaking at #51, and spending eight weeks at #1 on the Billboard Rap Airplay chart. “Chosen” has amassed over 450 million streams globally to date and become an international success, achieving BRIT Silver (UK), Music Canada Platinum, RMNZ Platinum (New Zealand), and ARIA Gold (Australia) certifications.

Blxst has architected a new era of West Coast hip-hop and culture by hand not only as a rapper, singer, songwriter, and producer but also as a creative visionary who mixes, masters, and self-edits his videos and artwork. In high school, the South Central native taught himself how to produce and record, collaborating with YG, Mozzy, Snoop Dogg, Nas, Rick Ross, and more. Following a string of buzzing singles in 2019, he forged an ironclad creative partnership with Bino Rideaux on their first critically acclaimed Sixtape. In 2020, he partnered with Red Bull Records and unleashed his solo debut EP, No Love Lost, to unanimous tastemaker praise. The deluxe edition of No Love Lost yielded the platinum-certified smash “Chosen” (feat. Ty Dolla $ign and Tyga), posting over 450 million streams while breaking into the Billboard Hot 100 and hitting #1 on Rhythmic and Urban radio.

Kickstarting 2021, Blxst dropped the Just For Clarity two-pack and Sixtape 2 with Bino Rideaux. He also earned the Billboard Rising Star Award, becoming the first artist ever to receive the honor at the 2021 Billboard R&B/Hip-Hop Summit. Posting up more than 1 billion streams, he won “Best New Artist Of The Year” at the 2022 XXL Awards and claimed a place in XXL’s coveted 2021 Freshman Class. He also was selected as a Breakthrough Artist on Amazon Music and earned nominations at the 2021 BET Hip Hop Awards and BET Soul Train Awards. These milestones positioned Blxst to create even more impact in 2022 and set the tone for his latest release, Before You Go. The project was released to critical acclaim, debuting at #90 on the Billboard 200, #11 on the Independent Albums, #19 on Current R&B Album, and #41 on Current R&B/Hip-Hop Albums charts. The lead single “About You” also impacted heavily on radio, reaching #11 in Urban and #16 in Rhythmic formats. Following the success of Before You Go, Blxst was tapped for high-profile collaborations with Kendrick Lamar (“Die Hard”), Chris Brown (“Show It”), and Kalan.FrFr (“No Stoppin”).

Greg Hammer, the Managing Director of Red Bull Records, shared his perspective of working with the growing artist, Blxst, and Reb Bull Records partnership with the Evgle team.

Greg Hammer, Managing Director of Red Bull Records, shares, “Blxst is a game changer, and we are thrilled to see the continued success of ‘Chosen’ and his monumental growth as an artist. The entire Red Bull Records crew and I look forward to what’s to come with this incredible talent and our partnership with the Evgle team. Congratulations to Blxst for this well-deserved accomplishment!”

Since its launch in 2007, Red Bull Records has quietly evolved into a homegrown haven for the cultivation of career artists with global reach. Operating out of Los Angeles and London offices, the international independent record label houses a diverse roster of talent, including The Aces, Albert Hammond Jr., Arkano, Beartooth, Blxst, CVIRO+GXNXVS, Flawes, Gavin Haley, Kofi, Kyle Banks, Peter $un, and pineappleCITI. As of 2022, roster artists have generated over 3 billion streams and video views—unprecedented for an indie. The company’s unrelenting, unapologetic, and unwavering commitment to artist development has resulted in multi platinum, platinum, and gold successes as its acts have built devoted audiences worldwide, indelibly impacting popular culture from outside of the system.

Blxst continues to rise with his current global tour in support of his latest project, “Before You Go,” which was released April 22, 2022, via Red Bull Records / Evgle LLC. More info on tour dates and releases can be found on his official website here. Check out the video for “Chosen” below. Learn more about Red Bull Records here. Follow Blxst on Instagram @blxst and Red Bull Records @redbullrecords.