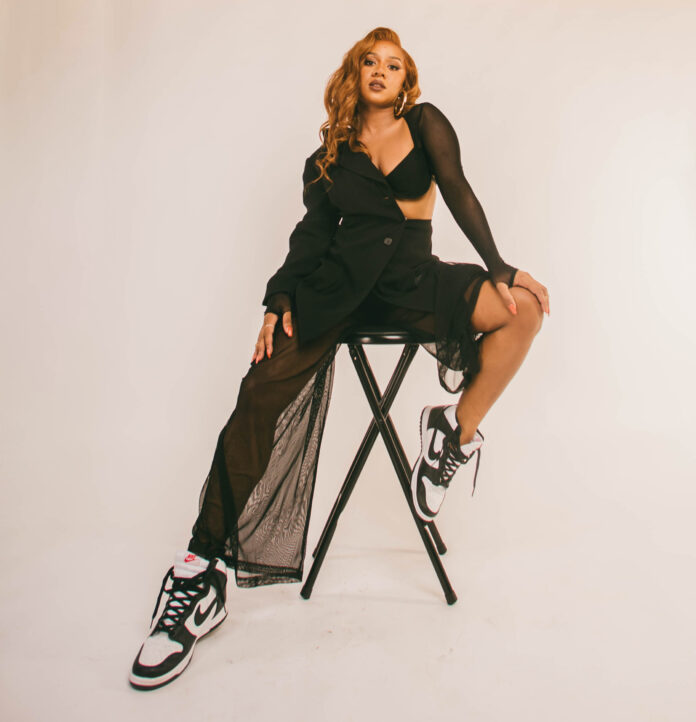 Premiering on the platform on March 27, 2022, Jazmine’s music video for her sultry single, “Money and Cars,” breaks ground as Pinterest TV’s first partnership of its kind. The video innovatively draws upon the hit Netflix series Bridgerton for costume and setting inspiration, taking place in an extravagant mansion and featuring immaculately dressed dancers and performers in big ballgowns and embroidered suits. However, the R&B artist also adds dimension to the narrative by featuring an all-black cast and production team in her video, including notable faces like Real Housewives of Atlanta star Kandi Burruss, Loren Lott from The Young and the Restless, and director Melissa Eno Effa.

“I think it’s important for us as Black women to be seen on and off the camera,” said Jazmine. “It wasn’t until I was much older that I realized the effects that lack of representation had on me. This video is very symbolic of the things that make us beautiful as Black women, as women of color, and as creatives. I am happy Pinterest and their team saw the vision and assisted us in making history.”

ENSPIRE spoke with Jazmine about the music video, her creative process, and her career goals.

How does it feel to be one of the first partnerships with Pinterest TV?

Honestly, Melissa (The Director) and I prayed together to God and pitched for a year prior to this coming into fruition. We knew it had to be divine if it was going to happen, and I truly believe it’s paying off! It’s Surreal! I feel like because the idea was so specific, we HAD to partner with a team that would see the value in what we were envisioning for this music video. Pinterest really let us have creative reign to be our best and really embraced us with support and structure to make this happen!

What was the inspiration behind the creation of ‘Money and Cars’?

Writing Money and Cars was like a lot of my sessions – therapeutic.

Gourty Maxx and I were talking about relationships and I blurted “YOU KNOW WHAT I CAN’T STAND!…”, later coming up with lyrics that lead in the song “Why you do that? Why you showing out just because? Was you looking for the applause?” It was fun for us to both get things off our chest and just create. The next day we woke up and still loved the song, playing it all day – that was the real test. Then Gourty later got SlimWav to join us in adding his verse, and the next steps were the music video!

What was the inspiration behind a Bridgerton-themed music video?

Black Excellence! – That was the base of our creative meetings. Bridgerton was a show we both loved and were watching at the time. Melissa felt like they also represented Black People/People of Color in a different divine light so I was on board from there to infuse the two.

What was your favorite part about filming the “Money and Cars” video?

My favorite part about filming was looking around and seeing my friends and family. I got to hire the same dancers I worked with while background dancing for Xscape years ago. My mom did all the outfits and even handmade some! My best friend, Loren was on our “Royal Court”. Fort Valley State (a local college in Macon) volunteered for class credit and assisted us for the entire 16-hour day! That was for sure the best part!

What do you want viewers/listeners to take away from the music video?

Overall, I want people to really take away a sense of pride and feel seen! It smelt like coco butter and edge control on set. There were black women in front and behind the camera. This music video was really for creators, artists, black people/people of color, women, Bridgerton fans …and so on!

What are your goals moving forward for your music career? What does the rest of 2022 look like? What is your vision for 2023?

I keep praying and manifesting that this music video is my audition for Bridgerton’s upcoming seasons! (LOL) so I will be on set (with Loren) in London! AMEN!

Also, the album. Money and Car’s is a part of a body of work that me and Gourty Maxx (featured artist/producer) created. It will be released this fall and I cannot wait! It’s a very bright and vibey project.

What do you want readers to know about you and your music?

My music is an extension of me, but there are so many parts of me! I love to act and I love to make Youtube Vlogs. I always invite people to come be virtual besties with me!  (LOL)

While originally released through Pinterest TV, it was subsequently added to Jazmine’s Official YouTube Channel. Check out the ‘Money and Cars’ movie video below!