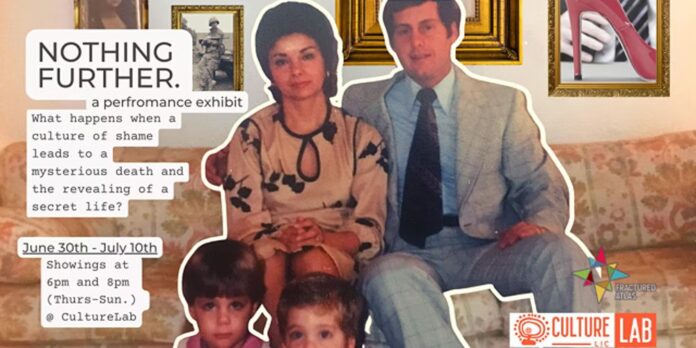 Created by Meridith Grundei, a New York-based artist, Nothing Further explores the complicated and painful ways that a father’s Vietnam war-born PTSD affected his relationship with his daughter, family, community, and subsequent generations. Based on a true story, Grundei used this one-woman performance to communicate themes of family secrets, generational trauma, gender identity, and the need to maintain an agreeable social exterior.

“Nothing Further came from the police report that was filed after the investigation of my father’s death had been completed,” says Grundei. “The last two words on the report read, ‘Nothing further.’ As audiences will discover, however, there is much more to explore and investigate in this piece.”

The performance took place at Culture Lab LIC in New York from June 30 to July 10 and was described by Culture Lab on Twitter as having taken the audience “on a generational whirlwind of a ride through the closed doors of a suburban home.”

Performed to an intimate audience of 12 each show, Nothing Further was certainly a hit. In fact, one audience member, Tana S., had this to say about Grundei and the performance:

“Nothing Further is an imaginative and captivating one-woman show that explores the secrecy and love intertwined in familial relationships. I believed every word that Meridith said. The confusion and love she felt towards her father touched me deeply, while her need to keep up appearances made me laugh out loud. Perhaps most importantly, the questions asked in the piece inspired me to quietly explore my own personal family history during the show. It is an extremely strong piece of theatre that should be seen by a wide audience.”

The performance was executed with the help of director/projection designer Brian Freeland, composer/sound designer Gary Grundei, choreographer Darius-Anthony Robinson, and docent Mackenzie Sherburne. Aside from creating and starring in the show, Meredith Grundei also produced it.

Before creating masterful performances like Nothing Further, Meridith Grundei accomplished much academically and theatrically. While she has appeared as a concerned parent in multiple commercials, her passion for out-of-the-box thinking and non-linear storytelling first drew her to perform with several theatre companies across the United States such as Sweet & Lucky (Third Rail Projects), FRANKENSTEIN (Denver Center for the Performing Arts), The Taming of the Shrew (Colorado Shakespeare Festival), FAITH (LOCAL Theatre Company), and The Misanthrope (American Conservatory Theatre).

Described as “a multidisciplinary live wire who gets shit done” on her website, Grundei got her MFA in Contemporary performing arts from Napora University and studied with the SITI Company and Techtonic Theatre Project. She also cut her improv teeth at iO Chicago while working as an Associate Faculty Professor at The Second City Chicago.

Besides purely artistic pursuits, Meridith Grundei also acts, directs, educates, and produces. She is currently an Associate Artist with The Local Theatre Company in Boulder, Colorado, and enjoys traveling the country to teach others and perform improv as a guest artist.

Nothing Further will continue to be developed and seek supporting organizations. To learn more about Meridith Grundei’s work or contact her, check out her website and social media @thisimprovisedlife.

Brittney Griner Trial, Sentencing, and How to Help