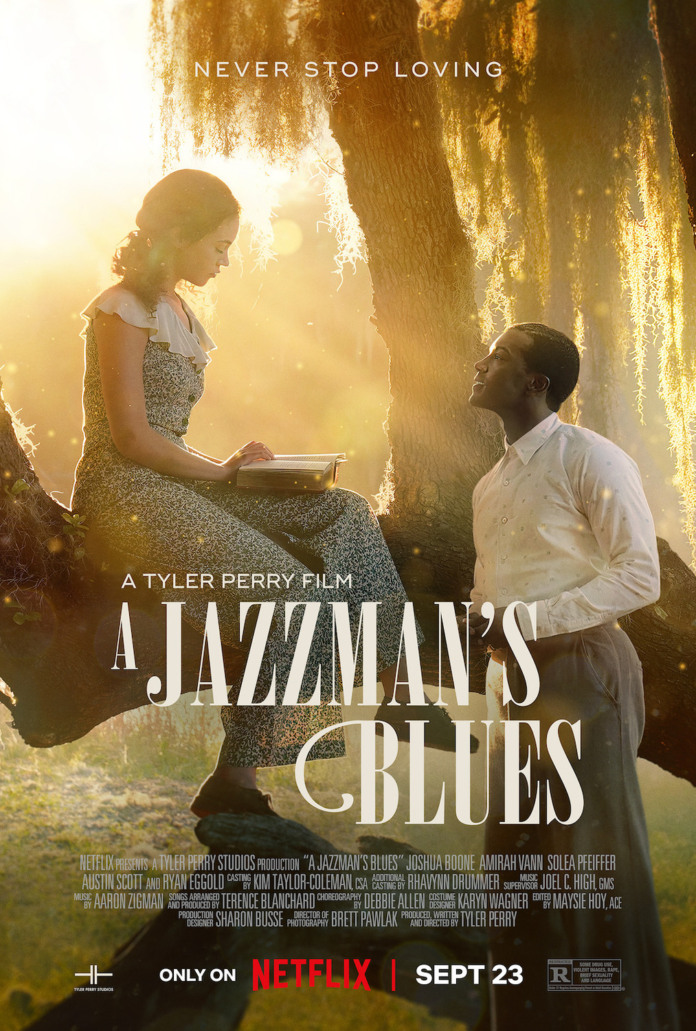 A Jazzman’s Blues is director Tyler Perry’s newest drama. Released on Netflix on September 23, the film’s score is composed by Aaron Zigman, who previously scored many of Perry’s previous films. Following his 2019 break with Viacom – now Paramount – his work shifted to Netflix, which put Perry into uncharted territory. So far, he has found his way, having directed a recent hit – 2021’s star-studded Don’t Look Up. Otherwise known for comedies like Madea’s Family Reunion, Perry has a catalog of heavyweight works such as Gone Girl and Temptation: Confessions of a Marriage Counselor. With A Jazzman’s Blues, Perry reaffirms the cinema world of his broad talent and dedication.

The film follows Bayou (Joshua Boone), a man who falls in love with Leanne (Solea Pfeiffer) while he was young and stays true to her despite all the hardship in each other’s lives. They each prefer to go by opposite names (Bayou’s real name is Horace John and Leanne’s nickname is Bucket) and have differing family bonds, but they are enamored with each other nonetheless. Leanne’s grandfather (Charles Dumas) is very protective of her and Bayou’s mother (Amirah Vann) is welcoming and generous. This is the first of many challenges and differences put between them, but as the saying goes “distance makes the heart grow fonder.”

Besides the love story, A Jazzman’s Blues explores the obvious and inescapable political turmoil of the time, taking place in the Deep South during the Jim Crow era. The film begins with the contrarian example of racism that all too many still face today: “I’m not a racist, I just don’t believe this is fair.” Leanne being mixed-race is also a challenge in itself for her, aside from her overprotective grandpa.

Throughout the film, Perry displays many challenges and values that are still experienced today, ranging from intersectionality, the education gap, women’s empowerment, and black excellence. With these conflicting themes between love and hardship on display, the film holds a raw and riveting charm, reeling the viewer right into its conflicted emotions.

The film is released at a time where Netflix’s stock plummeted while hundreds of employees were laid off. On the other hand, Tyler Perry saw much success, opening Tyler Perry Studios in 2019, a 330-acre studio including 12 sound stages and even a to-scale White House set. He became the first African-American to own a studio of such scale.

Released on Netflix today. Watch the trailer below: