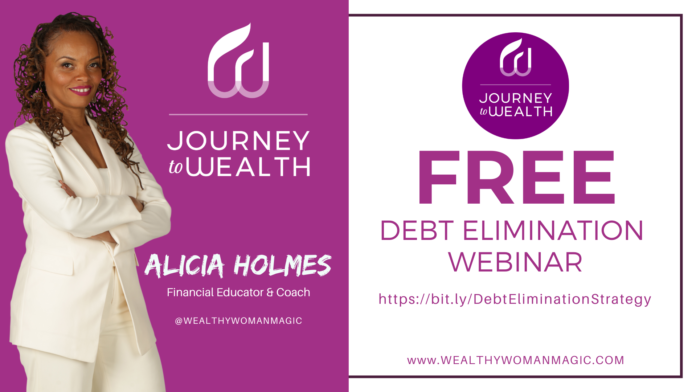 Self-made millionaire Alicia Holmes, dubbed “The Wealth Whisperer,” will hold financial boot camps aimed at helping women build their wealth, specifically women of color. The boot camp is a series of four online classes that began in September and will continue through October, covering four main subjects: Setting a Foundation for Wealth, Building Net Worth, Putting Your Money To Work, and Investing for Accelerated Growth and Massive Wealth.

Alicia Holmes achieved millionaire status over the course of a two-decade financial career that included mastering cryptocurrency, ETFs, Web3, index funds, and more. Holmes has both attended and later taught at New York University, where she earned both a BS and MA. She posited her teaching experience in founding Journey To Wealth, a company meant to educate women of color about finance. Through Journey to Wealth, she has held many other financial classes covering buying homes, investment, and debt reduction topics. This prolific wealth-building ability earned her the nickname “The Wealth Whisperer.”

“A dear friend, who is himself a successful investor, tagged me with that name because of my heart-centered approach to being a financial educator and wealth-building coach and because the women in my program end up accomplishing things they never thought they could,” Holmes said.

The gender wealth gap has existed forever and is still very much an issue. The Pew Research Center found that “In 2020, women earned 84% of what men earned, according to a Pew Research Center analysis of median hourly earnings of both full- and part-time workers.” Race exacerbated these inequalities. A 2021 study by The Center for American Progress evaluated data from the US Census Bureau and found that Hispanic women earned just 57 cents for every dollar earned by white men and that Black women earned 64 cents for every dollar earned by white men. However, the wealth gap is shrinking, and Holme’s classes aim to speed up that process.

“There is a limited understanding of how to invest, manage money and build wealth,” Holmes said. “A common cause is that often in our communities investing and wealth building are not passed down to us from our parents. Most likely, we have to learn for ourselves as adults, and unfortunately, sometimes that doesn’t happen for us.”

With all this in mind, Holmes emphasizes the importance of starting wealth building from within and the role emotions and mindset can play in finances. She aims to curate classes that aren’t just about money management, but about empowerment through money management. This is especially important in the face of such dreary financial prospects for women.

“Building wealth doesn’t start with reviewing our portfolios or when we make our first investment. It begins when we look inside and come face-to-face with our money stories. Often those stories are negative and they’re holding us back. Once we embark on this healing journey, we can then boldly declare our dreams and goals for living a life of financial freedom and abundance,” Holmes said. “My approach is loving and gentle and together, Black and Brown women support each other and hold each other in ways where, instead of feeling like they’re being criticized or shamed, they create a space where everyone is uplifted and affirmed.”

Women have long been oppressed in the sphere of economics, but Holmes’ class is just one-way women can find empowerment through finances. While Holmes’ September and October classes have already sold out, she will be hosting another boot camp in late February of 2023. To find out more about the class schedule and curriculum, visit journey-to-wealth.com. The website opens with an image of several thriving women of color (including Holmes herself) standing side-by-side – a picture of Holmes’ goal and many of her students’ future.

As Holmes says, “My ‘why,’ my north star is creating an entire generation of Black and Brown women who are creating generational wealth for themselves and their families.”