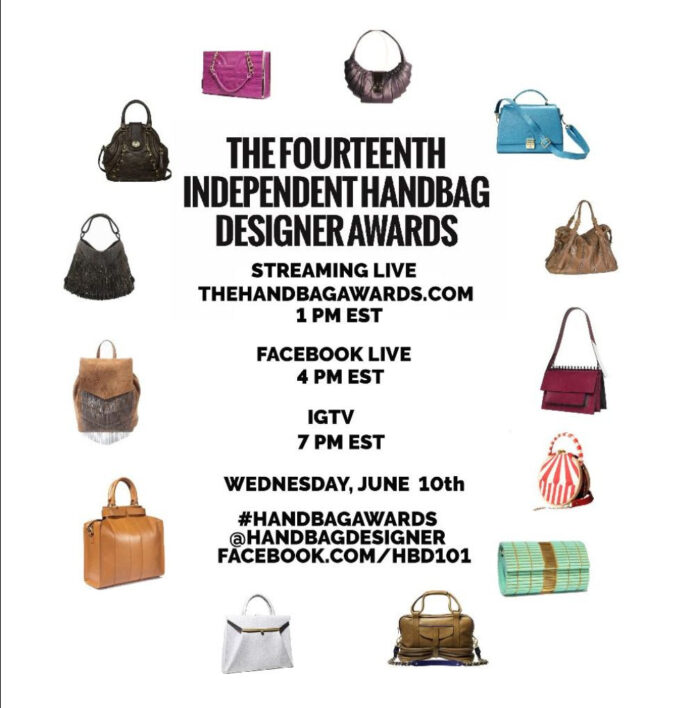 On June 10th, Emily Blumenthal who is admirably referred to as the “Handbag Fairy Godmother,” hosted the 14th annual Independent Handbag Designer Awards (IHDA) by Handbag Designer 101. Usually, the Handbag Awards take place in New York City, but due to COVID-19 health regulations, the much-anticipated event was streamed virtually on all platforms. Despite being online, the Handbag Awards received 1,000 submissions sent from 5 continents and 28 countries, successfully uniting the world in a time defined by isolation.

As the founder of the Independent Handbag Designer Awards, Emily Blumenthal has had years of experience with marketing and brand selection that has allowed her to pursue her passion for discovering new talented designers. Along with the IHDA, Emily has written work published (Handbag Designer 101: Everything You Need to Know About Designing, Making and Marketing Handbags) and is currently a Professor of Entrepreneurship at the Fashion Institute of Technology where she is the first female hire in the business department. Emily has collaborated with brands like Swarovski, Timberland, Kate Spade, and Nine West as well as being featured in publications such as InStyle magazine, Harper’s Bazaar, Today, and Fox Business.

Being a mother of three, Emily has emphasized girl empowerment, diversity, and inclusivity in her professional life. In order to teach her children these values, she launched “The Charmsters” which is an animated girl squad that fills the gap throughout the media, toy, licensed markets by teaching young children these important values at a young age.

The Independent Handbag Designer Awards also highlights these values. Founded in 2007, the event is intended to celebrate design and creativity around the world. There are nine categories of winners, some of which include The NY NOW Best Handbag in Overall Style and Design, The Bella Magazine Audience Fan Favorite, The Danielle Nicole Student Made Handbag, and The LEATHER, SUEDE, and SKINS Best Handmade Handbag. Securing thousands of viewers from around the world, it is now the only international competition to discover, recognize, and create brand awareness for independent handbag designers.

The switch to IHDA being virtual is not the only change that COVID-19 has caused in the industry. Emily acknowledged that marketing strategies have drastically changed since quarantine began. Prior to stay-at-home orders, handbags were a necessity to carry your belongings in when you left the house. Now, handbags are a want, not a need, so marketing strategies have had to reflect this shift.

Shifting to a virtual platform this year proved to be a positive change. People from all over the world could easily attend the event, whereas normally they would have to travel long distances. Emily Blumenthal and the Independent Handbag Designer Awards united the world for a few hours to celebrate diversity and creativity, and that is something worth celebrating.