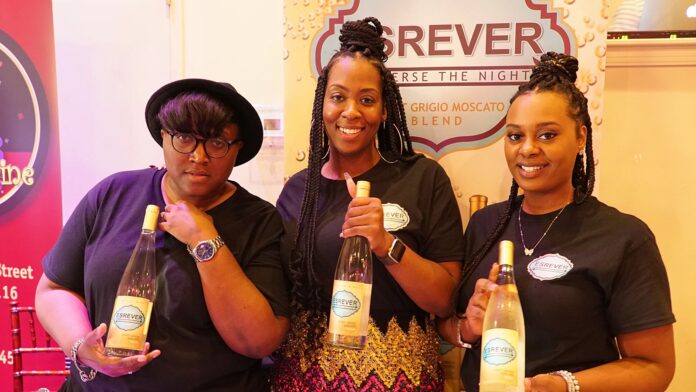 ( ENSPIRE She Did That ) A Group of Three Best Friends Take the Step of Expanding Their Business With the Help of Discovery Channel’s New Show, I Quit

A black-owned wine company, Esrever Wines was launched in 2018 after Ashanti Middleton, Tyshemia Ladson, and Jasmine Dunn decided they needed something else in their lives. These entrepreneurs are now featured on Discovery Channel’s new show, I Quit, a show that follows people that quit their day jobs to start their own businesses. Throughout the season, the owners of Esrever Wines are one of the six groups that is being mentored to grow their business. The mentors are—Harley Finkelstein, COO of Shopify, Debbie Sterling, CEO of GoldieBlox, and Tricia Clarke-Stone, co-founder and CEO of WP Narrative.

Middleton, Ladson, and Dunn had no experience with winemaking. But, they decided to make this their future as they hung out and drank wine together on the weekend. Middleton has experience with starting a business and has aspired to be an entrepreneur since high school. They originally wanted to sell purple cognac but soon realized that production costs were out of their range, they settled for selling wine.

Several wine experts disregarded the trio as they searched for information on winemaking. The ladies did not give up, they eventually found a vintner in California. This vintner liked the will and ambition that the three friends had and agreed to work with them. This led to them creating a Pinot Grigio-Moscato blend, a drink they had created themselves while mixing wines in Dunn’s mother’s kitchen. They now work with wine grapes that vary from year-to-year and also have a plan to include organic and vegan wines.

The name Esrever Wine originated from the word “reverse”, just spelled backwards. Middleton recalled a business class she had taken while trying to think of a name for the business. Her teacher had said, “‘If you’re struggling with a name, you can just pick a word and reverse it,’” Dunn recalls. “So, Ashanti said, ‘Well, why don’t we just reverse ‘reverse’?’ It wasn’t just the fact that she said that; it tied into the fact that we always got together on the weekend. We cried, we laughed, we joked, we ate, we drank; and we always were like, ‘Oh my god, tomorrow’s Monday. I wish we could just reverse back to the weekend.’ It just made so much sense.”

“If you’re not having such a good day, throw that night in reverse with a taste of Esrever”

Eboni Roberts Went From Hobby to Entrepreneur with Kicky Mats