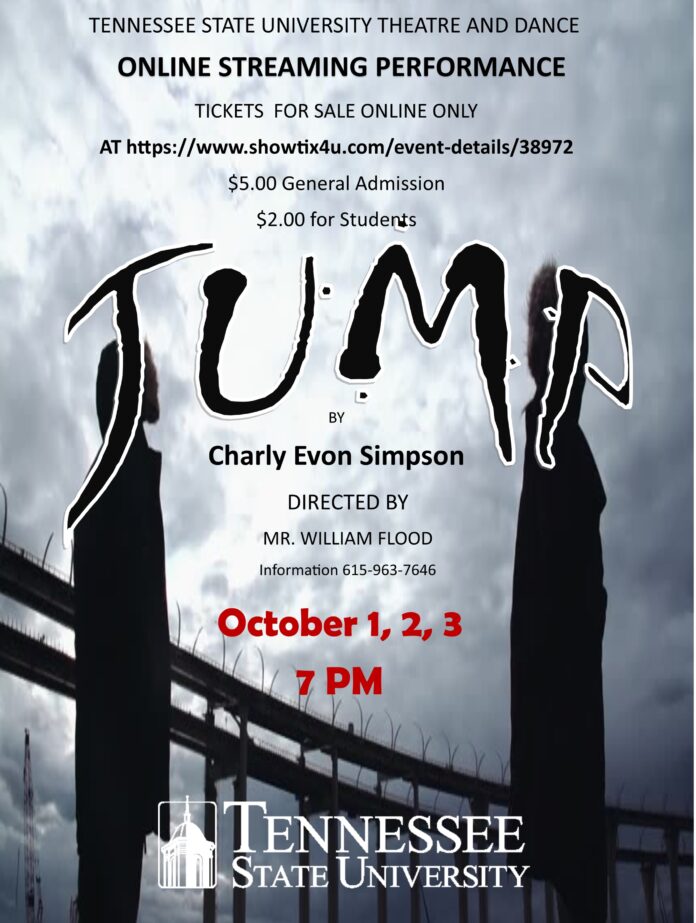 Tennessee State University (TSU) is hosting a virtual theatre performance Oct. 1st-3rd. This is the first performance of the 2020-21 academic year and the first since the pandemic. Directing the play is Professor William Flood. Flood earned his terminal graduate degree an MFA in acting from the University of Louisville, and his BFA, from Wright State University in acting/musical theatre emphasis. He is an assistant professor on the tenure track at Tennessee State University. A proud member of Actors Equity, with over 20 years in the business, he lived in NYC for seven years, toured the country starring in musicals, appears in independent film, print, television, and is thrilled to direct this digital world premiere production.

The play, “Jump,” by Charly Evon Simpson. Evon Simpson is a Black female playwright from Queens, N.Y. “Jump” is her latest play and has created a large buzz in the theater community. In choosing the play, Flood said, “I chose the play because Charly writes about Black people so beautifully and yet has no sacred reverence. We are human, and fleshy, and passionate and incredible, beautiful, gross, and loud and do everything. In the hands of Evon Simpson, Blackness moves from the monolithic image of us crafted by the white supremacist theatrical canon to a beautiful tapestry of inclusion, and Black excellence.”

Here is a summary of the play from the Dramatists Play Service: “As Fay copes with the death of her mother and loss of her childhood home, she seeks solace by visiting the bridge her mother took her to as a child. There she meets Hopkins, who walks the bridge as a balm for his own grieving. “Jump” is a play full of flickering lights, vapes that fall from the sky, and the magic of hope in the midst of loss.”

This is Flood’s second production at TSU and his first DOT about a black family facing the dementia of the matriarch during the holidays. TSU is a public HBCU in Nashville, Tenn., producing such greats as Oprah Winfred, Richard Dent, and Dr. Glenda Glover. TSU has won several awards for its performance art programs. To watch “Jump,” ticket purchasing is $5 per device. For more information, you can follow TSU theater on Instagram @TSU_Theater.