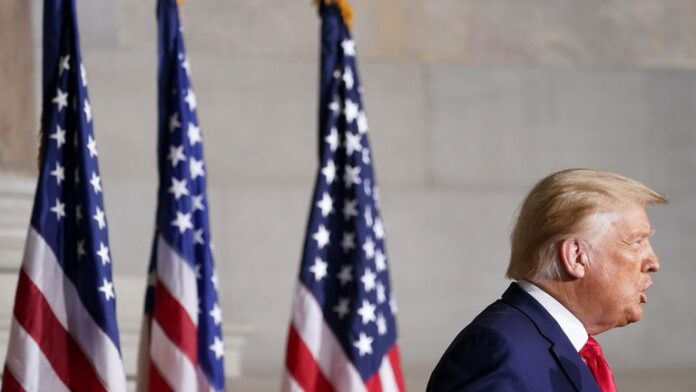 ( ENSPIRE News ) Trump’s “Patriotic Education” and What This Could Mean For Future U.S. History Textbooks

During a speech Thursday, President Trump announced he would create the 1776 Commission to promote “patriotic education” in schools and a grant to help develop the “pro-American curriculum.”

This commission would place an emphasis on pro-American and patriotic ideas in the school curriculum. Included in this new curriculum would be Wilfred M. McClay’s “Land of Hope: An Invitation to the Great American Story.” A book that has been criticized as ignoring most social movements in history and disregarding the long-lasting struggle for Black freedom.

Trump’s push for “patriotic education” is not the first attempt at censoring certain aspects of America’s sordid history. In 2015 a McGraw-Hill World Geography textbook was quoted describing slaves as “workers from Africa to the southern United States to work on agricultural plantations.” Another case came in the form of a 2016 Connecticut social studies book claiming slave owners “cared for and protected” slaves. These books were a blatant erasure of the atrocities and crimes committed during slavery.

These censorships not only harm the children from reading them, but they also create a generation oblivious to American history. When HBO’s Watchmen came out, it was the first time many people had ever heard of the 1921 Tulsa Race Massacre. LaGarrett King, a professor at the University of Missouri, claims the U.S. favors a progressive history and, to fit this idealistic view of history, it has erased the experiences and oppression of Black people.

Many people and organizations have fought back against this edited history by attempting to get a direct curriculum implemented in schools. In 1994, the National Center for History in the Schools released three volumes, co-authored by UCLA Historian Gary Nash, which outlined national standards for history curriculum. However, these volumes received massive backlash for having a “grim and gloomy” viewpoint on American history.

Currently, the New York Times is trying to change this skewed American history through the 1619 Project. This project started in 2019 and developed in large part by Pulitzer Prize Winner Nikole Hannah-Jones, which involves essays, poems, and photo essays meant to start the conversation about America’s history with slavery. Hannah-Jones has stated the 1619 project’s goal is to “tell the truth about who we are as people and who we are as a nation.” Starting in 1619, when the first slaves arrived in the Virginia colony, to present time.

As issues of racial inequality and prejudice impact the nation, Americans need to know the full history of slavery and the lasting effects felt today.