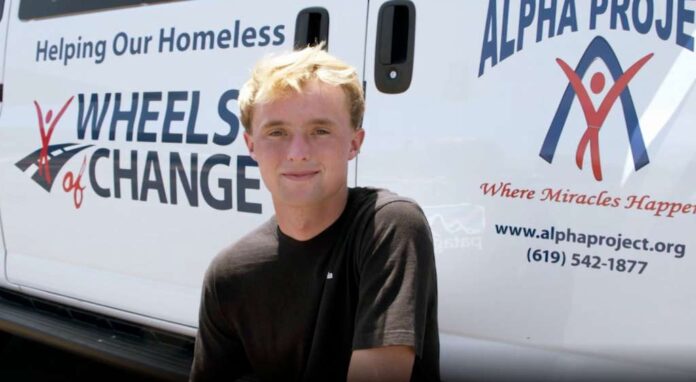 Kevin Barber has managed to bring positive change to downtown San Diego. When he was just 16, Barber began his own nonprofit for the homeless called Wheels of Change. Inspired by a similar program employed by former Albuquerque mayor Richard Berry, Wheels of Change allows homeless people to make an income by cleaning litter off the streets. Since its inception, the nonprofit has proved itself quite successful, providing a means of relief for San Diego’s homeless while also addressing the city’s long-running litter problem.

Barber’s inspiration for the program partly came from his mother, Dr. Carolyn Barber, who worked in an emergency room. Barber would often hear stories about the homeless from his mother, who lamented the fact that there was not some sort of work program in place to help them get back on their feet. Having watched a TedTalk in which Mayor Berry described his own city’s work program, Barber modeled Wheels of Change after Berry’s non-profit and began to gain financial support for it through crowdfunding.

Realizing he would need to partner with another organization, Barber went to Alpha Project, a San Diego-based non-profit dedicated to ending the city’s cycle of homelessness. Although the organization’s leader, Bob McElroy, was initially skeptical of Barber’s willingness to help, the teenager quickly proved himself dedicated to the cause.

With Kenneth “K.B.” Allen, formerly homeless himself, stepping into the role of the main supervisor for the work crews, Wheels of Change went from idea to reality. Now, the work program employs 20 people a day, who get paid $52 per four-hour shift. The non-profit makes its money through donations as well as city funding, the latter of which is used to pay for vehicle maintenance, supplies, and equipment.

Feedback concerning the program has been quite positive, with many business owners having voiced their gratitude to the program for cleaning up the streets in front of their establishments. The organization has also helped clean up drug paraphernalia in public areas, and residents have noted that fewer homeless people are sleeping in the streets since the program began. Since its creation two years ago, the non-profit has cleared over 180 tons of litter.

Wheels of Change has managed to improve the livelihoods of many of San Diego’s homeless and has tackled the litter problem that plagued the city’s downtown area. Up to the present, the organization has continued to change lives for the better, and Barber should be thanked for having set that wheel of change in motion.

FOSSI Is Born To Maximize Inclusion for HBCU Students