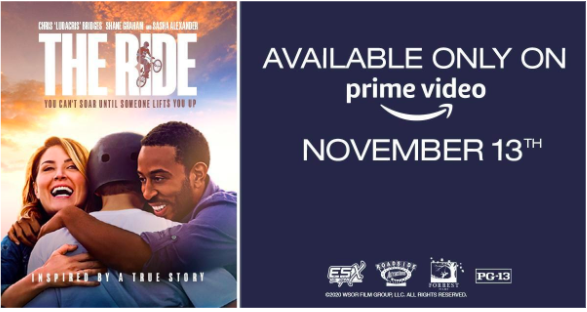 “We love a great story that inspires and promotes uplifting messages,” Lucas said. “With Chris Bridges delivering a performance that can’t be missed, we know the Roadside Attractions team is especially adept at reaching and connecting with the wide-ranging digital streaming audience ‘The Ride’ caters to.”

Alex Ranarivelo’s “The Ride” follows John McCord, a gifted young athlete who triumphs over a troubled upbringing. After a violent, racially-charged incident lands him behind bars and in juvenile detention, John (Shane Graham) is placed with an unlikely set of foster parents, Eldridge (Chris ‘Ludacris’ Bridges) and Marianna Buultjens (Sasha Alexander), an interracial couple who want to provide the troubled young man with a second chance at a happy life. Having to overcome the challenges of John’s white supremacist upbringing, Eldridge uses his new foster son’s fascination with BMX to begin forging a relationship with John. Brought together through the triumphs and tribulations of extreme sports, the new family grows in mutual respect and love and together ride toward BMX glory.

“We are thrilled The Ride will be available to watch this November, just in time for families to enjoy during the holiday season,” said Howard Cohen and Eric d’Arbeloff, co-presidents of Roadside Attractions. “When we saw the film, this true story was told with incredible emotion, heart, and compassion found in one of the most surprising places – the world of extreme sports.”

Anastasia Washington is Back! With New Performances and Attendance