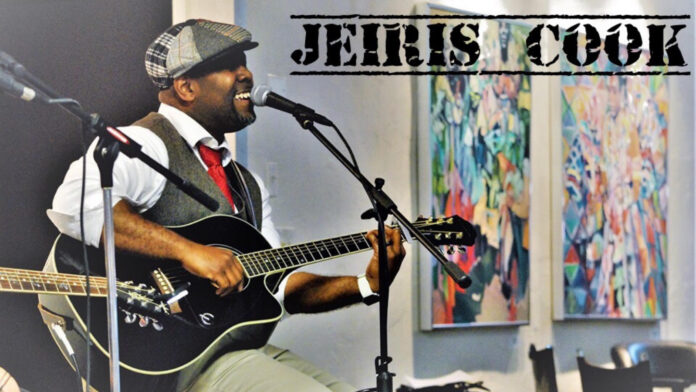 Jeiris Cook is an acoustic guitar solo artist with a sound that is reminiscent of old school blues, 70s styled R&B, and Smooth Jazz. After going musically dark for nearly 13 years, he picked up his sister-in-law’s acoustic guitar in May 2016 and committed himself fully to learning to play the guitar. He has revived his passion for singing, by producing a unique sound of R&B and Soul music. Cook has also found that music helps people in many ways and works with The Monae Management Therapy Sessions to make things a bit easier for others.

Jeiris Cook’s newly released single, “Bad to the Bone” blends both R&B and Rock genres with soulful tones. He has just finished recording a new single “Enough is Enough” with Indie Records Recording Artist Mindy Davey. The single was released on all Digital Platforms on November 27, 2020.

What made you previously stop playing music?

The short answer is, I stopped playing music to start a family. I met my wife, we fell in love, had kids and life takes a turn in a different direction. I enjoyed music but all the new experiences that come with marriage and kids leaves little room for much else. At least that’s what I used to tell myself. Now I am a big believer in making time for the things you really want and looking back on it, I think I just needed a break from music. When I left music, I always sang in some sort of group with others. And while I enjoyed it and we remain friends, it takes work to stay together as a group. At that point in time, I think we were all ready to move in different directions anyway and the start of my family life just accelerated the split from music.

What made you pick the guitar back up?

Well truth be told, I never picked one up until May of 2016. I am a lifelong vocalist and even during my musical hiatus, I continued to sing. But I always relied on someone to provide a track for me to write to. I learned to play in part because I wanted to remove that obstacle, write when I wanted and accompany myself. Plus I thought it would be cool to be the dad singing at my son’s campouts. I’ve never looked back.

What are the projects you are working on?

I’ve just released two projects, a collaboration with Mindy Davey (a recording artist out of Buffalo, NY) entitled “Enough Is Enough and a single entitled “Dreams”. I am in the process of promoting them both at once and it’s been a wild ride. I’ve gotten so much positive feedback on both songs. In March of 2021, I plan on releasing a song entitled “Drunk”, just in time for St. Patrick’s Day.

What is The Monae Management Music Therapy Sessions?

The Monae Management Therapy Sessions was really derived from a belief that music heals on many levels. 2020 has been a trying year and I can’t think of a better way to lift spirits. We’ve done these for the past 3 months and all have been well received. The next one will be in January, although we’ve yet to announce the dates. Stay tuned.

Can you tell us more about this and explain how you are contributing?

The Therapy Sessions we do we believe help people forget about these crazy times we’re living through, if just for a moment. I thought it would be great to give people a chance to continue experiencing live music. Even though it’s virtual, we still find that people enjoy and support us doing it. My contribution is easy, I get to sing the songs and interact with everyone. My management team at Monae Management has been really spearheading the entire effort with marketing and advertising. It’s been an amazing experience and I look forward to doing more of these.

What do you think is the most powerful part of your new release, “Dreams”?

I think the most powerful thing about “Dreams” is the lyrical message behind it. In this industry, you must have a lot of determination to do anything significant. So this was an ode not only to myself but to other musicians like me on a similar journey. And I think the ability to lift each other up in this way is powerful. I also recorded this song right after I had oral surgery to have wisdom teeth removed. So, for me personally, this song is a journal entry of sorts, accompanied by music and singing.

With a musical background and history of singing, Jeiris Cook, now a solo guitarist finds love in making music once again. After creating a family it seemed to be time to take up the guitar and to make music to help others during these uncertain times.