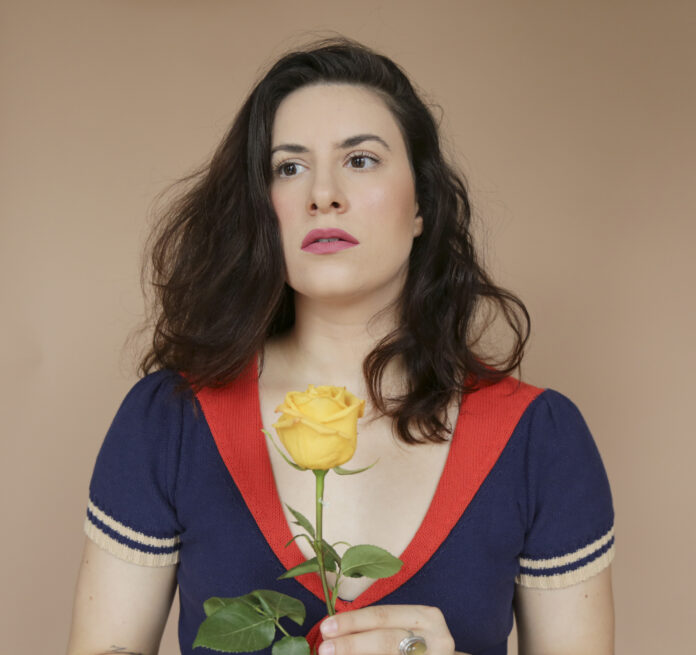 ( ENSPIRE Music ) Interview: Brooklyn-Based Queer Pop Artist That Brunette Pairs the Release of Her New Single with Donating The Proceeds of Her T-Shirts to Local Black Drag Artists

“Platonic” opens with a twinkling melody that stands alone for several bars, save for a light rhythm from a shaker; the start is vulnerable, contemplative, and somehow both cheerful and melancholy. Then the artist behind That Brunette, Madeline Mondrala, joins the tune, singing, “Brooklyn ain’t the same without you / even though I barely knew you / I’m pretty sure we were in love / I’m pretty sure we were in love.” But this isn’t your standard breakup song. As its title suggests, over the course of the song the listener learns that this is a story of the loss of a new friend who has moved away, thrusting the status of a blossoming platonic relationship into limbo with the absence of a strong history to fall back on.

The song is a tale of an unexpected friendship that had come at a time of deep personal growth, but rather than competing with one’s time for introspection and self-advocacy, accelerated these projects. Musically, the tone becomes steadily more confident as it progresses, but this progress never entirely overrides the song’s initial vulnerability―the twinkling opener continues throughout. The last third of the song features background “Ahhs” that indicate a growing acceptance of an abrupt change in a friendship that threatens its viability and resignation to letting things play out however they may. As a whole, “Platonic” conveys complicated (and sometimes conflicting) emotions around independence and attachment, claiming the phrase “in love” for a non-romantic relationship and simultaneously mourning its loss and expressing gratitude for its brief existence.

I was fortunate to have the opportunity to interview Mondrala on her new single, upcoming musical project, and December-long initiative to donate the proceeds from her merch sales to Brooklyn-based Black Drag Artists in this moment of COVID-19 related bar closures and reckoning with racial inequality in the US. You don’t want to miss this!

Did a particular experience of platonic love spark the creation of this song?

Yes! This song was inspired by a collaborative friendship that helped me discover aspects of myself on a deeper level. Some friendships really help you to grow and evolve and this one really did that for me, so I felt compelled to write a song about it.

100% of the proceeds from your merch sold this December will be given to Brooklyn-based Black drag queens, whose artistry you say has supported you “in too many ways to count.” What are some of the ways that the work of Black drag queens has inspired you?

I live in Bushwick, and before the pandemic hit I was always at one of the three gay bars in the neighborhood, Metropolitan, Macri Park, or the Rosemont watching drag shows on the weekends. Having spaces like that was extremely emotionally supportive for me. Being able to watch such talented Drag artists perform on the regular really made a positive impact on my mental health. So many Drag performers preach radical self-acceptance which is such a necessary message for people to hear in this day and age. They’ve also inspired me to take risks as a performer and feel more comfortable on stage. I’m lucky enough to have friends in the scene and nothing beats watching them command the space and get an entire room of strangers cheering for them in a matter of seconds. Watching Drag is the most inspiring and invigorating form of escapism I’ve found. I really miss it and I am thankful that it’s a part of my life.

How are you selecting queens who will receive the profit from these T-shirts?

I’m going to give this money to my dear friends who I know will make amazing use of it.

With this summer’s resurgence of Black Lives Matter activism on the national scale, recognition of Black people’s contributions to society is trending. How do you think we can continue on this path, even long after summer 2020 has passed? Are there any organizations you want to plug that you have personally worked within the fight for Black lives?

As a white person, it is imperative that we don’t become complacent even as headlines move on and time passes. It’s my responsibility to continue to listen to black people and internalize their experiences so that I can begin to break down my own unconscious racism and use the privilege I have to affect positive change whenever possible. I think reparations are so important, which is why I’m giving money from my merch sales to Black Drag Queens, but there are so many ways to give back to Black people in a tangible way. I would like to shout out The Underground Plant Trade which is a brilliant online community that encourages white people to send plants to black people. It was started during the pandemic by DJ Freedem.

Who are you listening to right now? How do they influence your music?

I’m listening to my 2020 ENERGY playlist a lot lately. Every year I make a playlist designated to collecting songs that make an impression on me throughout the year. It’s usually a very eclectic mix of songs that friends have turned me on to, or I heard in a movie, or that an artist I already love released during the year. This year it features MUNA, Chloe x Halle, Qveen Herby, Tierra Whack, and so many others. Listening to 2020 ENERGY reminds me of beautiful moments I’ve experienced over the course of the year, and feeling those vibes can definitely inspire me to write new songs.

You’ve had a steady stream of single releases over 2020–is there an album coming up?

I’m going to be releasing an EP in 2021 that I’m extremely excited to share. Stay tuned!

Reka Robinson Empowering Women With “Single You” Academy And Podcast

Philip Smallwood Has Historic Art Exhibit at the Butler Institute