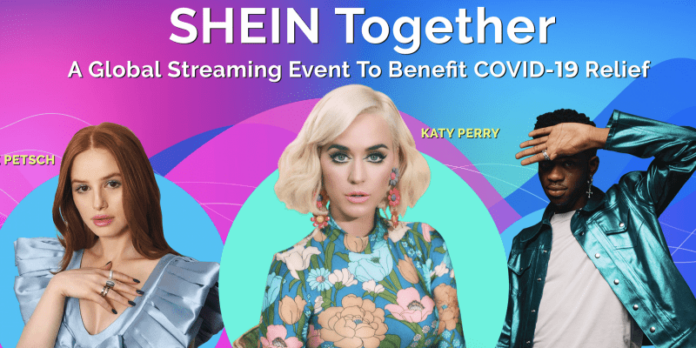 Global fashion retailer SHEIN will be hosting its 2nd annual virtual music festival, “SHEIN Together Fest” on May 2, 2021 to be streamed via SHEIN’s free app. The online event aims to bring people together in celebration of love, music and fashion. SHEIN will also donate $300,000 to three charities chosen by its community during its Light-a-Wish campaign. This will be the first among many other large philanthropic initiatives from the brand in 2021.

This year, the unique live stream music showcase begins Sunday, May 2nd at 6:00 PM EST and will be hosted by Erin Lim Rhodes and packed with exclusive performances by Nick Jonas, Steve Aoki, Maren Morris, Tinashe and Lunay.

The Light-A-Wish campaign launched in late December 2020, called upon the SHEIN community to elect three causes that meant most to them. Over the course of the campaign over 10 million people visited the Light-a-Wish page and 2 million made a wish for their top cause. The SHEIN community chose, racial justice, at-risk children, and climate and as a result, SHEIN will donate $100,000 to each partner including NAACP (LDF), Together We Rise, and Ecologi. SHEIN will announce the next phase of its philanthropic program this May.

“Last year SHEIN Together helped unite 1.8 million SHEIN fans to raise awareness and funds for Covid relief,” said Molly Miao, SHEIN’s Chief Marketing Officer. “The overwhelming response that SHEIN Together received last year has inspired us to continue our philanthropic efforts and give back to our community.  This year, we are thrilled to have such a diverse lineup of talent to help us celebrate the Light-A-Wish campaign.”

You can download the app on iPhone or Android at the Apple App Store or visit www.shein.com for more info.

Rising Fashion Designer Trenton Lavell on His Roots in the Fashion...