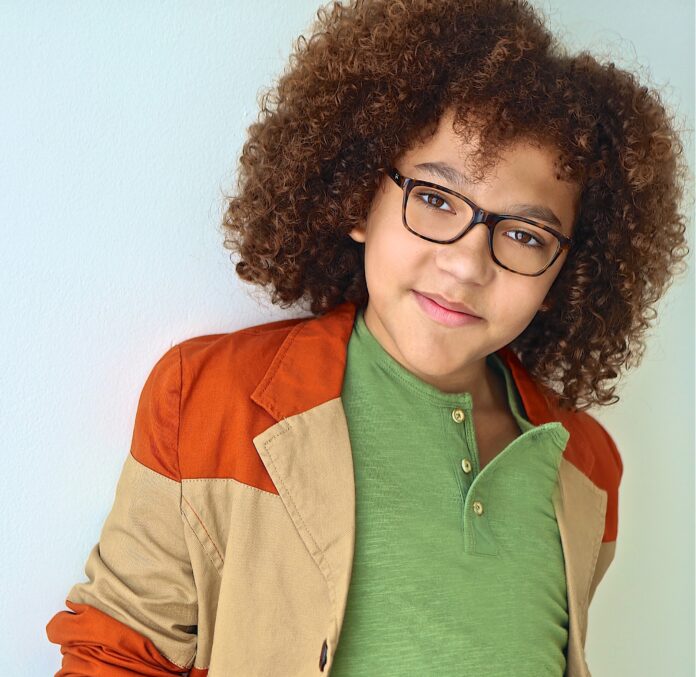 You may recognize him as Johan Johnson on ABC’s hit series and spinoff “Mixed-ish,” but 12-year-old actor Ethan William Childress is just getting started. The Las Vegas native started acting when his parents enrolled him in a charter school for the arts. Showing promising talent and potential, his parents enrolled Ethan in an acting showcase, and from there, he pursued acting full time. The show is a spinoff of the ABC original hit “Black-ish” starring Anthony Anderson and Tracee Ellis Ross.

“Mixed-ish” centers Tracee Ellis Ross’s character, Rainbow when she was a teenager. The show follows Rainbow as she recounts her and her family’s experience as a mixed-race family in the ’80s, and the dilemmas of acclimating to the suburbs while staying true to themselves. See Ethan and the rest of the cast every Tuesday at 9:30 p.m. PT.

What made you want to get involved in acting at such a young age? Were you always creative?

I did go to an arts-integrated school prior to getting into acting. So everything we did was tied to either art, music, or acting which I really liked a lot. But I didn’t know I was even interested in acting like this until I went in for my first audition. The minute I stood up in front of the casting people I knew this is what I wanted to do. Something in me just clicked.

You play Johan on Mixed-ish. How would you say you and your character are alike? How are you different?

Johan and I are alike in the fact that we both are adventurous and just enjoy having fun. We are also both pretty easygoing, so long as we are having fun. We both also love our siblings very much, some days more than others, but in the end, family is everything for both of us. Where we are different is that Johan is not athletic really at all. I did play competitive soccer for years before having to give it up to act. And I also played flag football and even basketball for a couple of years. Johan is also a bit on the naïve side. He doesn’t always get it even though he’ll pretend like he does. But that’s part of what makes him so adorable.

Working on a show like Mixed-ish, you probably work with all kinds of amazing actors and creatives? Anyone, in particular, you loved getting to work with? Did they give you any friendly advice?

I really enjoy working with Mark-Paul and Tika. They have been just amazing. They are friendly and helpful. I might as well be their son for how well they look out for me on set. During season one, in between takes, Mark-Paul would show me different jujitsu moves. He really sparked my interest in it so much that I started taking classes on my own. I am really hoping to get back to that again soon when it’s safer too. Tika helps me understand what directors are asking sometimes, and she is always making me laugh. One director I’ve gotten to work with a lot is Anton Cropper who is very creative in how he sees the scene going. He’s even used one of my suggestions once which was really cool to see when the episode aired. He really gets on our level when talking to us kids which make it easier to see his vision too.

I’m sure acting in a hit TV show takes up a lot of your time, but how do you like to spend your free time when you’re not working?

Normally I’d be taking jujitsu classes once a week and taking acting classes when the time would allow. I also have to do auditions and interviews. But in between all that I like to play online video games, watch movies, go swimming, and ride my bike. When I am able to go home to Las Vegas, I try to hang out with a couple of my friends and just be a regular 12-year-old kid.

You’re so young! Do you think acting is something you will always want to do, or do you have other aspirations?

Right now acting is something I am enjoying very much. I would like to be able to do it for a long time. Then maybe I will look at doing something different, like behind the camera. My mom is always telling me I need to have a fall back too outside of this industry. So, when I go to college it’ll probably be for a business degree. But I am not sure yet. Like you said, I’m still young, and right now this is my passion.

Following your dreams so early in life, what advice do you have for other creative kids out there who want to be actors or entertainers?

Be sure this is something you really want to do. It’s a lot more work than I was expecting at first and even though you’re a kid, you’re in an adult world. It’s a huge responsibility to take on and not to mention what your parents are going to have to take on and sacrifice too. But if you’re that passionate about it, keep at it, don’t give up, work on your craft every chance you get, and most importantly, don’t take anything personal. Not every child or even adult actor makes it big right away. You never know what the casting director is looking for so you can’t ever think you did something wrong. I’ve seen stuff on TV that I’ve auditioned for and was like “ok, I see now why I didn’t get it.”

Despite all the big changes in his life Ethan is embracing balancing his time on the show with being a normal kid. When he’s not shooting, he splits time between Las Vegas and Los Angeles playing soccer, video games, jiu-jitsu, and giving back to his community. Ethan continues to pursue his love for acting and is even working on some exciting new projects, including a role in a new animated film.