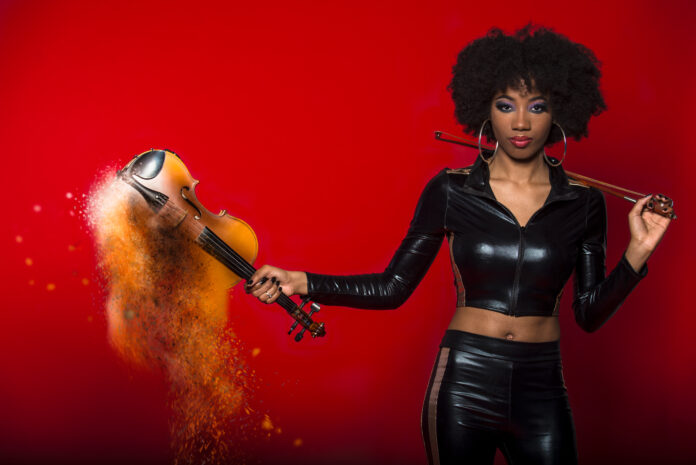 Joy Black knew her life would change the minute she picked up a violin for the first time at thirteen years old. She was an eighth-grade girl who was regularly bullied because she was skinny and different. Indeed, the mocking was so intense that it pushed her to develop an eating disorder at one point. However, one fateful night, she had an unexpected dream that changed her life forever, opening the way for a musician who would collaborate with vast organizations and some of the biggest names in the entertainment industry.

“In my dream, I saw myself on stage in front of thousands of people. It felt so real and it gave me a sense of hope and something to strive for,” said Black. “I had never even seen or heard of a black woman playing the violin, but I knew that’s what I wanted to do. The violin is literally the reason I made it through high school because my orchestra class was. No matter what I had to endure during the rest of school, I wanted to be there. That was my escape.”

Fast forward to the present day, and the 24-year-old has performed at events for Ford, Gatorade, CBS, the New England Patriots, Essence, and many other companies.

She held a three-month residency at Busch Gardens in Virginia. Also, she has had her share of opportunities to work with high-profile music artists and creators, such as multi-platinum producer BricksDaMane (produced for Drake, Lil Baby, Nipsey Hussle), and star female rap artist Latto (formerly “Mulatto”), whom she recently collaborated with for her song “Youngest and Richest.” The Mulatto link garnered her an appearance on NPR.

Black is not your typical violinist from an affluent background. She recalls catching the train or the bus with her mother, who has always been by her side, and often braving the heat or the cold in order to make it to performances. Often tired, she still did whatever was necessary. Now, those memories are in the past, as she now books shows across the country and is light years ahead of where she and her mother once were financially.  Her journey has been different, but it is what made her who she is today.

Although Black is classically trained, what sets her apart from others is her ability to navigate multiple genres, including R&B and Hip Hop. Her playing style is unconventional, edgy, and eccentric. Eyeing massive success by way of the strings on her violin, she also hopes to shatter barriers for young black girls and boys who have never considered playing the violin as a profession.

“Typically, when people think of violinists, they think of a white person or an Asian person,” she said. “I have gotten some strange stares and people who may react a certain way when they see me; a black girl with natural hair playing the violin. I don’t let it bother me though. There are many people who support me.”

Currently, Black has a single out called “Champion Rising’, available on all platforms. She wants to become a nationally renowned figure, sell out festivals and music halls, and also collaborate with many more of the nation’s top music artists.

“I have a vision board that has everything that I want in life so I can see it every day and stay motivated,” Black said. “I think it is important to tune out all the negativity and visualize what you want. I keep a healthy, clean, and positive environment so I can have the best chance at being very successful. I will be.”

Stringz EMB ‘Perfect’, Speaks on Perfection and Being Humble

Tune In To a New Episode of Cleo Speaks Saturday, March...