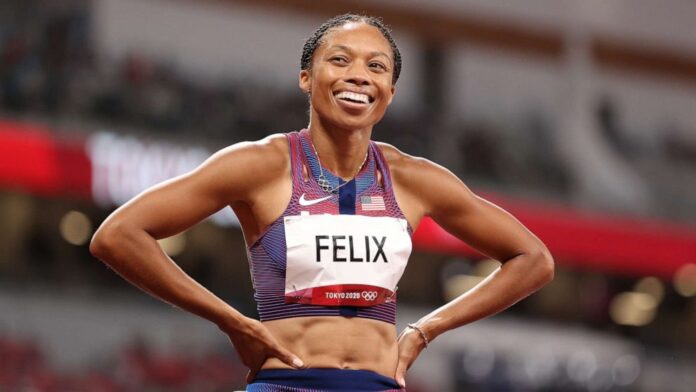 While every Olympic success story is already quite amazing, Allyson Felix’s story at the Tokyo Olympics might trump them all with its concoction of poetic justice, incredible perseverance, feminine strength, and a fitting end to one of history’s greatest track athletes. She would end up winning two medals at this Olympics, one bronze in the 400m and a gold medal in the 4x400m relay, putting her a medal above another American track legend, Carl Lewis, for most Olympic medals won in a career. However, while the physical accomplishment of Felix is already beyond impressive, especially since she was 35 while racing this year, age older than the typical sprinter, what might be her most impressive achievement is the inspiration she provides for all female athletes with this feat, especially mothers.

Allyson Felix gave birth to her first daughter in 2018, raising doubts among sponsors, most notably Nike, about her ability to compete. Yet, despite the unfair treatment she received, she continued to train. Despite the hectic years of Covid-19, she retained a mental toughness that would cement her as one of the greatest athletes to ever race, with Tokyo showing that no woman should or can be held back by corporate pressure.

With 18 World Championship Medals, including 13 Gold, there is no doubt that Felix is one of the greatest athletes of all time, and her final medals at the Tokyo Olympics have helped cement that. However, these medals were unique in accomplishing because they helped show on an international stage that a mother could still compete and win.

This issue noticeably came up when Felix accused Nike of being unsupportive of her when she gave birth to her daughter in an op-ed, noting that they wanted her back in competition as soon as possible, although she had just had a child. On top of this, they were offering a 70 percent pay cut, adding insult to injury. Finally, Felix requested guarantees she would not be punished if her performance decreased, a request which Nike quickly declined. It’s easy to see that from Nike’s perspective, once a female athlete became pregnant, they were simply worthless to them, an outrageously sexist attitude that Felix would help defeat in the coming years alongside other athletes.

First, as Allyson Felix’s complaints against Nike were echoed by other prominent female athletes such as Alysia Montano and Kara Goucher, Nike changed their maternity policies to treat female athletes more fairly. While it still isn’t a perfect system, it showed the ability of women like Felix to make a positive change for future female athletes.

Second, Felix never let up the gas on her running, quickly returning in 2019 to win more gold medals at the World Championships, showing both Nike and the World she could still compete at the top level. Then, training began for Tokyo to show on one of the world’s biggest stages that nothing could keep down female athletes, and as we all know by now, she succeeded.

When Allyson Felix first crossed the finish line for the 400m to earn the bronze and tied Carl Lewis’ record, it became clear to all the doubters who pointed to her motherhood as a negative that Felix will always be a competitor, and being a mother can’t negate that but only provide more inspiration for the world. When the 4x400m team finished the race to earn Felix’s final gold, it became clearer than it ever had before that she was an absolute champion for all athletes, women, and mothers around the world. No matter the doubters or the sexism, Allyson Felix could and would win wherever it may come from. Hopefully, this continues to help companies like Nike across the globe change their attitude when it comes to female athletes.

Callie Reiff New Hit Single “What Ifs” Takes Us on a...