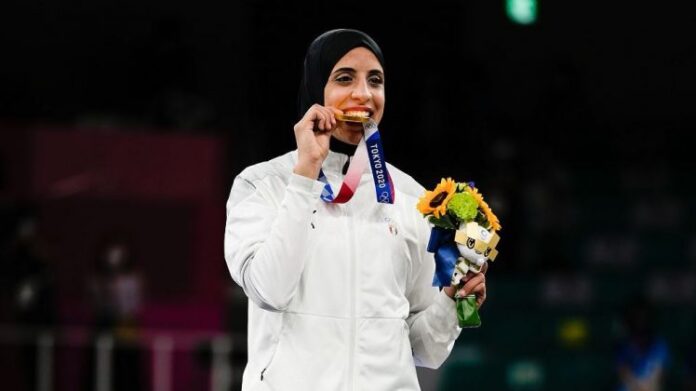 Feryal Ashraf Abdelaziz, 22, represented Egypt in the 2020 Tokyo Olympics in the sport of karate. In the +61kg Kumite, she faced Azerbaijan’s Iryna Zaretska (a form of karate that was once illegal and deemed dangerous).

Since she was seven years old, Feryal had been preparing and preserving for this time. It was well worth it, as she received two Yukos from her opponent, resulting in a 2-0 victory in the third round. Feryal’s family, who were watching from their home, were visibly moved. Her mother says, “You have honored us all, my love. I wish I were with you; I wish I can hug you. We were all supporting you, and you raised our flag.”

In recent decades, as a sport, karate was not recognized by the Olympics, but Feryal hopes to change that perception. Feryal thinks, “We have shown how beautiful our sport is and the strength during these Games, and we deserve to be here. I hope people will change their minds and include karate again in the future.” She adds thanks to her family internalizing the difficulties she’s been through to be in her position today and confidently admits, “I deserve this.”

Not only has Feryal etched Egypt’s name in Olympic history as the first woman to win a gold medal, but Ahmed Elgendy also holds the distinction of becoming Egypt’s first silver medalist and the first African to compete in the modern pentathlon. Fencing, 200-meter freestyle swimming, 15-jump equestrian show jumping, and a final combined event of pistol shooting and 3200-meter cross-country running make up the modern pentathlon. In swimming, Egypt’s 21-year-old swimmer Ahmed Elgendy was only a few points away from first. Elgendy says, “It was all a coincidence when I was young my mother took me to a club to join the swimming team because I had allergies, and my doctor recommended I start swimming to enhance my breathing.” “But my mother really liked the idea of doing five sports and encouraged me to join.”

It’s little wonder that Egyptians were pleased after winning six gold for their country and demonstrating their physical discipline and effort. They’re expecting to keep carrying their flag to triumph at the 2024 Olympic Games in Paris.