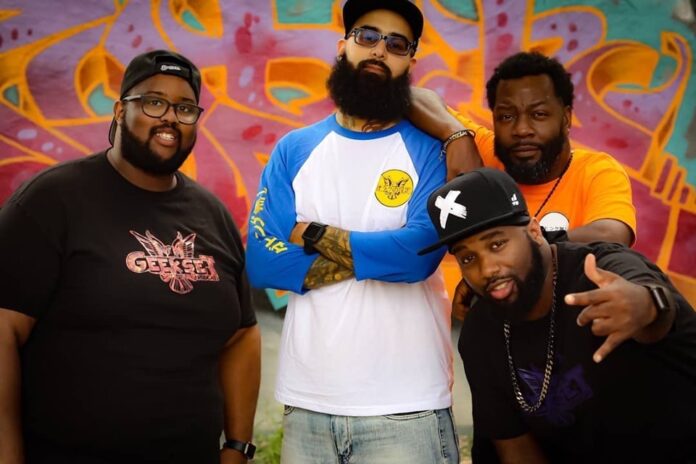 Podcasts are extremely popular these days, and most of us have found one that has piqued our interest. If you have not heard of GeekSet Podcast, what you are about to learn will expose you to a group of guys that will transform your perspective on what being a geek is. Didge, Bacardi, Lib, and Young Deuces, all of whom have had a lot of success in the entertainment industry, have definitely set their podcast apart from other podcasts on the market today, as their discussions that mix hip-hop and geek culture in one is nothing like anything seen before.

Geekset Podcast is a unique podcast that represents an area of Black Culture that doesn’t get talked about or addressed often, The Black Geek. Being Black and a geek hasn’t always been a known combination. The geek — educated and analytical, unsexy and obviously uncool — causes cognitive dissonance in an American imagination that has long characterized Black people as both uneducated and emotional or sexualized and cool. Well, that time has ended, and with podcasts such as Geekset, the Black geek’s existence will be made known and heard, loud and clear.

ENSPIRE Magazine had the pleasure of asking the Geekset Podcast gentlemen a few questions to share with our audience.

ENSPIRE: ENSPIRE Magazine has read on several outlets, your inspiration for the podcast, your passion for anime, video games, and comic books. How did you correlate all of this with the term geek? When most of us think of geeks, we think of the categorized “nerd or geek” in the technology industry, creating software programs and manipulating databases.

Bacardi – Geeks and Nerds are just words for people who are really passionate about things in their life. I think we stereotyped it into technology because, at a time, those things were very new to us decades ago. So, we looked at people who attached themselves to those areas and gave them a name because we didn’t know what to call that love for new technology. But in actuality, we call ppl nerds and Geeks for all types of things; book nerds, sports Geeks, foodies, even accountants get called nerds for their understanding of numbers. Being a geek or nerd shows you have a specialty or knowledge of something that you may have taken the efforts to understand and apply to life fully.

Young Deuces – It’s one reason we go so hard in changing that narrative because the thing is, Geek is a universal term. Just like Bacardi said, people like Shannon Sharpe and Jamele Hill are Sports Geeks because they talk about sports in a deeper sense that the normal viewer can’t. There are people like that in every industry; we’re just letting them know it’s ok to embrace that Geek side.

Didge – Also, Geek has been a term that has been essentially evolving over time. There are certainly Techno-geeks which would be those you’re describing, but there are also sports geeks, movie geeks, geeks of all types, and that’s what we want to show to the world.

ENSPIRE: Interestingly, you take the everyday things, comic books, anime, movies, hip hop cultures, and more and merge it all into relative dialogue. So how do you decide what you will speak on for each of your podcast episodes?

Didge – A lot of it is organic. We’re lucky to have good chemistry with our dialogue, so the show is a lot of the time based on our real conversations.

Bacardi – In the most honest terms, we wing it, lol. But because we talk daily in our group chats or person, we always keep each other up on new things. When the podcast starts, we take what really blew us away in our talks and bring it to the pod. Our tangents are probably the most natural of the show as those tend to really happen randomly and can literally take up a show, lol.

Lib – Honestly, we kind of don’t. We started this podcast because this is how we talk. This is how we enjoy our time together. We are true geeks, so it’s just fluid for us.

Young Deuces – It’s our happy madness of convo that people love. We don’t want to have a podcast that’s all fact-based. We want that Barbershop convo about Geek & Hip-Hop topics and then bring the listeners/viewers in.

ENSPIRE: Seeing the podcast gives a new light to what a geek is. The episodes are energetic and fun. Was it essential for you to show the world that geeks are cool as well?

Lib – Absolutely! Growing up, I (Lib) would get picked on for reading comic books and collecting action figures; 30yrs later, I’m like the coolest, hottest looking dude (in and out of the podcast) Lol. People need to know that we’re not sitting in a basement all day playing W.O.W. or Yugioh cards. We enjoy life, life’s offerings, sports, and most importantly, we shower DAILY. Lol

Didge – Definitely, it’s been changing recently, but there is very much still a stigma on what a geek is. We want to show that it isn’t true and that we all have that Geekpoint inside us.

Young Deuces – And not to toot my own horn, but I believe I’m cool AF!!!! Like we’re not the typical Geek that you see on TV, but by all means, we’re not the exception. There are actually more people like us in the Geek world, but mainstream media hasn’t highlighted it yet. Take people like us, RDC World, The Blerd Gurl, King Vader, Roxxy Haze, Arcade Tokens–there are so many people in this Black Geek/Nerd life that is the “IT” people, the ones that are trendsetters and not socially awkward. We’re all fighting that fight to change the narrative.

Bacardi – I mean, Geeks and nerds get a bad rap with how society portrays them. And in many cases, a lot of people still keep those passions of things hidden in the real world in hopes of not being ridiculed. All Geeks and nerds have felt the pressure to keep their anime love on the hush for fear of being made fun of. But as you get older and as social media has shown more people across the world embracing anime and comics so freely, it’s important to show that everyday people geek out on the same things some are ashamed to talk about.

ENSPIRE: Where do you see the podcast in the next five years? And what are some of your future goals for the platform?

Young Deuces – The thing about changing the narrative is bringing and highlighting our peers as well. In the next 5 years, our goal is to be at the forefront of this movement, collabing with other creators and representing both the geek & Hip-Hop Culture strongly. Like I already got ideas for Magazine covers, coverage, think pieces, etc., that’ll move the needle, and we’re already actively working towards it. The plan is to take over and bring as many people with us.

Lib – Exactly. I see the podcast as influencers in our culture as well as geek culture.

Bacardi – And in the next 5 years, I would like to see Geekset become a standard in providing Geek and Hip hop content and news to the masses. Curated shows, content, more podcasts from up-and-coming talent. Take the Podcast on the road to personally reach more fans and build networking and business relationships with many other black and brown content creators.

Didge – Ideally, hitting the convention circuit to take the show on the road. We have some other shows and programming in the works that I think our fans will really enjoy, so getting those released and then taking the show on the road would be huge for us.

The Geekset Podcast group has aligned themselves with major events such as C2E@, Crunchy Roll Expo, Wakanda-Con & more. As a result, it has been able to interview major names such as Roy Woods Jr Van Lathan, Debra Wilson, and Phil LaMarr – to name a few. Additionally, their upcoming season will premier well-known names like Jay Ellis, Meg Scoop, Mack Wilds, Tristen Winger, Dave East, and Drumma Boy.

For those who have an interest and passion for anime, video games, and comic books, the Geekset Podcast will definitely entertain you.

For more information on the Geekset Podcast, check out the links below.