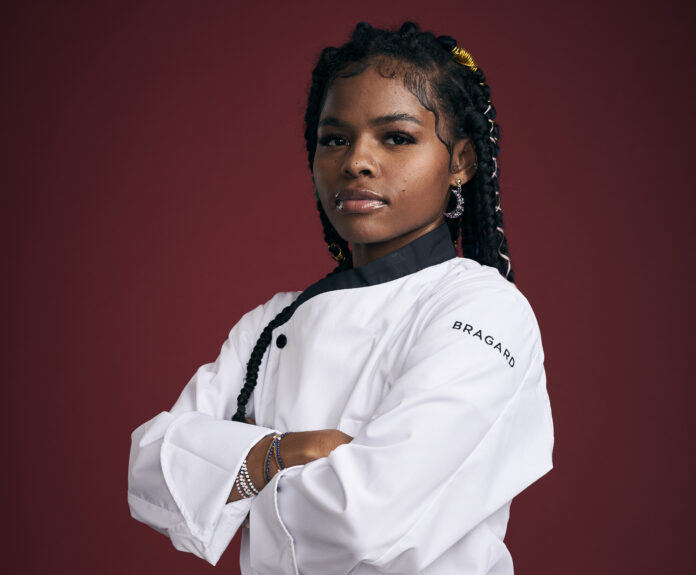 A seasoned chef, Keanu Hogan has been cooking for 24 years–and she’s only 26. Her love for the culinary arts began early in her Baltimore, MD, childhood home, where the women in her family bonded by preparing meals together, imparting on Hogan the perspective that would become her mantra: “Food is love.”

After graduating high school, Hogan would leave that formative family kitchen to attend Monroe College in New York, where she studied culinary arts, but her intimate approach to food–the belief in its nourishing capacities, both physical and spiritual–remained. Having refined her cooking skills at Monroe, Hogan would work on four lines and supervise three kitchens, all in just a few years. And she moved back to where it all started, the DMV, to open several businesses (more on those later!).

So much success—not to mention drive and innovation—at such a young age got the attention of Hell’s Kitchen producers, who contacted Hogan to see if she would consider taking part in the show’s 20th season, called “Young Guns” because each contestant is an accomplished young chef competing to become Chef Gordon Ramsay’s protégé and earn the coveted position of Head Chef for Gordon Ramsay Steak at Paris Las Vegas. Although she was sent home after the “Cook for Your Life” challenge in episode 8, Hogan’s abilities deeply impressed Ramsay, who told her upon her elimination, “You’re a firecracker. You have a focused, determined, tenacious mind… You’ve done your parents proud, Baltimore proud… so head up high.”

And hold her head up high is exactly what Hogan has done since her elimination. I had the opportunity to ask Hogan about her approach to cooking, what it was like to be on Hell’s Kitchen: Young Guns, her businesses, and more for ENSPIRE. Here’s our conversation.

What is your approach to cooking, and how did you arrive at it?

I believe that my food creates an experience. People enjoy my food, and it sparks a whole new conversation… It brings people together and really honors culture, family, and traditions. I can share a part of my life and who I am with a meal. I grew up having these experiences with my family, and I am simply continuing that tradition.

I understand you were hand-selected by the Hell’s Kitchen production team—that’s so exciting! What was the process like, and how did you feel about it?

I was so surprised to receive that Direct Message. I had only JUST started my business page, and I lacked a lot of confidence at the time. In the beginning, I didn’t believe it, and honestly, I didn’t quite feel that it was really happening until I saw cameras everywhere. It was so surreal… I’d experienced nothing like it. To have cameras in every corner at all hours of the day. It wasn’t an easy feeling watched during every move you’d make, but once it was time to do my thing, I honestly would forget.

We know Gordon Ramsay for having high standards—and quite the wrath when they’re not met. So how did you stay strong in the face of harsh critiques?

I always took his criticism as a lesson. I took mental notes and took nothing personally. He’s a master at his craft, so I was just eager and honored to receive any advice from him. I work really well under pressure, so I think his “wrath” was actually very motivating for me.

What has been your proudest moment on Hell’s Kitchen so far?

I’d have to say my last night. I was honest with Chef Ramsay about who I was and my past and learned quite a lot about myself as a chef and a person. I was proud of myself and how far I had made it in the competition, and I felt proud to represent my family, city, and culture.

Your catering business, The Perfect Bite, promises food that is “ethically sourced, curated from the soul.” I would love to hear more about this mission.

The Perfect Bite ties back into my relationship with food and why I began cooking in the first place. Cooking for me is meditative. I become so lost in it that it’s almost as if it’s not even myself cooking the food. I always do things with intention, and I believe my food is no different. I believe in local/seasonal produce and incorporating as many traditional techniques as I know. This is when food becomes love.

Your newest venture is Tastee Towers, a Baltimore-based dessert trifle business. So what led you to start selling trifles, and how can readers snag one of these delicious treats?

I am a do-it-all kind of person, and I was baking and making all the desserts for my daughter’s 1st birthday party. I’d always been a baker since I was a kid. I made these strawberry banana pudding champagne flute trifles, and they were the talk of the party. Afterward, the idea just came to me to start a business making the desserts I grew up eating in trifle form. I swear the idea found me. I created the business intending to teach the recipes to my children and them teaching them to theirs. Starting my own tradition.

Ori Or Skincare By Dr. Runway, A Holistic Approach To Beauty

MIFINGER™ A Strong Shield of Security From Contact with Harmful Viruses...