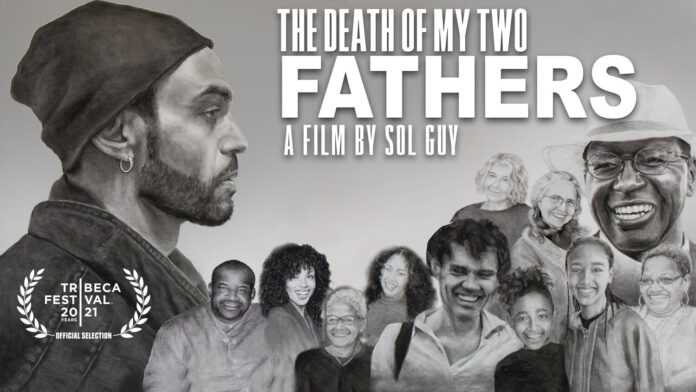 ( ENSPIRE Entertainment ) Sol Guy Examines Archived Videos in Documentary, The Death of My Two Fathers, Inspiring Him to Reconnect with His Estranged Family

Sol Guy’s father recorded videos soon before his death in 1993, but it would take Sol 20 years to watch the archived videos. The videos tell the story of a Black guy from Kansas City, Missouri, who moved to a small community in British Columbia, Canada, wanting to give his new family a better life. As he confronts his father’s choices and consequences, the videos motivate Sol to go on his own quest better to understand his bi-racial family and his Black American ancestry.

Sol’s estranged sister and the family his father left behind are inspired by the records, causing a re-examination of family and what it means to be Black in America. While he gains a greater understanding of his father, he also gains a better awareness of himself. The consequences of Sol’s decisions become more apparent. Recognizing that until he confronts his greatest fear, history is doomed to repeat itself. Sol Guy explains what he’s learned about the complexity of identity, the endurance of racial trauma, the hardships of parenthood, and the liberty that comes from facing our own death in this letter to his children. The film is a metaphor for how our human family must reconcile with our sad past to achieve a more hopeful future.

ENSPIRE Magazine had the pleasure of asking Sol Guy a few questions about his debut film, The Death of my Two Fathers, and to get his perspective on the making of the film and what is next for him.

ENSPIRE: What was the biggest thing you learned from the creation of the film?

SOL: I learned about strength and vulnerability because there is a lot of fear around going to the truth of where decisions come from and how they impact you and the people you love the most. The vulnerability required not to repeat the mistakes you make along the way. The gift lives in being present in what you’re creating and not looking past how people will receive it and what it will do. The greatest gift of this process has been present in the unfolding of the ongoing opportunities to meet family I’ve never known, to view family I grew up in a new way. Something happens to a boy who loses his father when he is young; it leaves an unresolved pain. It’s not a lot in society that gives you roadmaps for that loss. You have to front as if you have it figured out when the guy that was your north star is gone.

ENSPIRE: You brought up some important issues concerning social issues and the state of America. How have you reconciled your own ethnicity and race?

SOL: It’s a work in progress. To define it is to confine yourself and deny the reality of the blood that runs through me due to my parents’ decision out of love is to deny who I am. It isn’t easy when you’re younger, but I’ve realized that I had a couple of gifts. In the town we grew up in, my father recognized that we were the only people of color. He didn’t try to talk that away. He helped us understand that we were different, and he didn’t try to talk that away to make us fit in. He asked questions and provided examples, and gave us history. Also, growing up in that community, a small rural town, it didn’t matter what color you were because it was safe. I’m not saying that I didn’t experience any racism in the bigger cities, like Vancouver, but it was dealt with, and we moved on. So when I moved to America and trying to navigate these spaces traditionally occupied by people that didn’t look like me, I didn’t have to compensate for the fear when you’re in an unfamiliar environment. I got a different view in my formative years as a child, so I had a different tool even when challenged as a black boy becoming a man. It didn’t make me better; it just gave me a different experience.

ENSPIRE: It sounds like you had permission to be who you were. You were in a state of being, and that’s cool. It is good to know that you grew up in a space where you could be you. So why did you pursue turning this into a film as opposed to putting it in a book or some other form of art?

SOL: I come from a music background, and it’s all stories to me, but I was blown away by where you can take a person by sharing your experience in using film. And it just made sense because what he left was video and the film was a way to approach a challenging conversation with family. So it became a mechanism and invitation for us to get to know each other in hopes that it could be something that I could share with the world.

ENSPIRE: I can dig it. To take what he did and make an impact on a generational level while uniting family is amazing. So I heard you mention that you have a music background, and it sounds like you’re creative. Would you describe yourself as a creative?

SOL: I kind of wear different hats, and I’ve been lucky enough in the creative space and create in different mediums. I’m curious, and I like learning. I didn’t know what visual art was until I met friends here doing visual art, and it made me question why certain projects were. I credit my curiosity to traveling and being in different cultures…Every day I count my blessing to get up and do these things and ask these questions.

ENSPIRE: So what’s next for you? Was this just a moment in time, or do you think you will make different other films?

SOL: It was really gratifying to make the film and how it resonated with different people and see how people connected with it at film festivals. So I would say that it will be another film at some point because it’s always something being made, and having a creative practice keeps you healthy even if it never comes out and the world never sees it. So I think we’ll have to wait and see.  I’ll keep making things. I don’t know how to exist without doing that. It’s a big lift, but you learn a lot along the way.

ENSPIRE: What advice would you give other filmmakers that are working on their first project?

SOL: Any experience that you can get along the way as a producer or runner or any job you can take to be in proximity to creating, take it. Take it with humility and ask questions. Don’t let your lack of experience stifle the possibilities. Even if things are not making sense, you have to step toward the thing you’re inspired by.

For more information on the Death of My Two Fathers documentary by filmmaker Sol Guy, visit the website HERE. Follow the film on Sol Guy Instagram for updates from the creator.

Related Article: The Last Out, A Desperate Plight for The American Dream – ENSPIRE Magazine