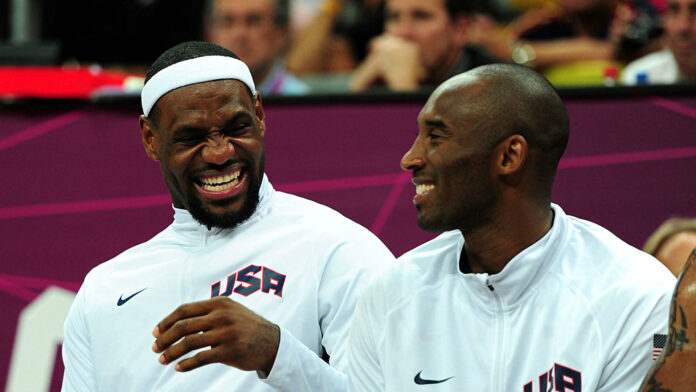 Basketball spent many years debating as to who was the No. 1 premier superstar of the NBA, James or Bryant? Similar to how NFL fans debated Peyton Manning or Tom Brady, and soccer fans debating Lionel Messi or Cristiano Ronaldo.

As the years have passed, the overwhelming consensus is that James has had the better career. As he approaches his 37th birthday, James — a four-time NBA Champion — is running out of chances to match Bryant’s championship ring count (5).

NBA sportsbooks list LeBron’s Lakers as one of the top favorites to win the 2022 NBA Championship, along with the Brooklyn Nets.

While Bryant was rarely involved in the greatest of all time (GOAT) discussion, James has strongly made his case as the best to ever do it.

To many, he has already surpassed Michael Jordan as the greatest basketball player. To others, he is only chasing MJ in the “GOAT” department.

When comparing the careers of the two NBA legends, it’s hard to deny that James has been the better overall player, and he’s still got several productive years left in him.

But when it comes to the overall popularity and global following, will James ever achieve the same level of admiration that Bryant did during his illustrious playing career?

LeBron: A Polarizing Player In Miami

James went from arguably the NBA’s most beloved player to the league’s No. 1 villain in the summer of 2010. Rather than try to win a championship with his beloved hometown Cleveland Cavaliers, James took the easy way out.

The King announced his plans to sign with the Miami Heat, joining two other superstars in Dwyane Wade and Chris Bosh.

But back to the word “polarizing.” After leading the Heat to their second straight NBA Championship in 2013, James was voted as the most popular player in a poll conducted by ESPN, per Darren Rovell.. James garnered 12.9 percent of the votes, narrowly finishing ahead of Bryant (12.5 votes).

Here’s what Rovell wrote at the time:

“After “The Decision,” James’ approval rating slipped drastically. For his final season in Cleveland, 15.6 percent of fans called him their favorite, according to the ESPN Sports Poll taken after the 2009-10 season. But for his first two years with the Heat, James was called fans’ favorite player by 10.2 and 9.4 percent, respectively.”

Still, James was greatly viewed as a villain during his four years with Miami. The Heat were the team you simply loved or hated. You either cheered for LeBron or you desperately wanted to see him lose.

Now, the overall public view on James seemed to change drastically when he left the Heat and returned to the Cavaliers in 2014.

It was hard not to be happy for The King when he led his Cavaliers to their first NBA Championship in 2016 — erasing a 3-1 deficit in the Finals against a Golden State Warriors team that won 73 games, a single-season record.

Subsequent ESPN polls still had James as the NBA’s most popular player, though again, Bryant wasn’t far behind him.

When James left the Cavaliers for the Lakers in 2018, there certainly wasn’t as much public backlash. He achieved his goal of bringing a championship to his hometown team, and the Lakers had failed to build a quality contender around him in that final year.

Conclusion: James Is Too Polarizing To Catch Kobe

There was no “forming a superteam” right when LeBron signed with the Lakers. James knew patience was required.

After an uneventful first year in La La Land, the Lakers managed to snag him a new superstar in Anthony Davis, acquiring the latter via trade with the New Orleans Pelicans.

Those two would lead the Lakers to a 2020 championship in the Orlando bubble.

However, LeBron’s early success with the Lakers hasn’t done enough to make him universally loved compared to other top athletes across the world like, say, Messi and Roger Federer,

Using geotagged Twitter data, Sports Insider pieced together a map that showed the most hated player in every NBA state. The results were overwhelmingly against James:

Bryant seemed to garner a lot more popularity and respect across the basketball landscape when he won two titles with the Lakers (2009 and 2010) without longtime frenemy Shaquille O’Neal.

Bryant’s final years with the Lakers were marred by injuries (he played just 107 total games from 2013-14 to 2015-16), and the team was extremely non-competitive without him. There certainly was some sympathy in that he never got the chance to make one last championship push before retiring in 2016.

For LeBron, it just feels like regardless of where he performs, there’s always going to be a long list of haters. Other generational athletes such as Jordan, Ronaldo, Tom Brady and Tiger Woods still had plenty of fans rooting against them.

It seems like whatever James does, a huge portion of the NBA fans will always cheer against him. That’s the price you pay when you’re a non-stop winner throughout your career. Just ask Brady.

James may have all-around more popularity and a greater following than Bryant ever did. But he’s equally the NBA’s most popular and the most hated player, so if you factor that into all of this, it’s hard to argue that James will never fully achieve the level of respect, admiration and love that Bryant garnered.