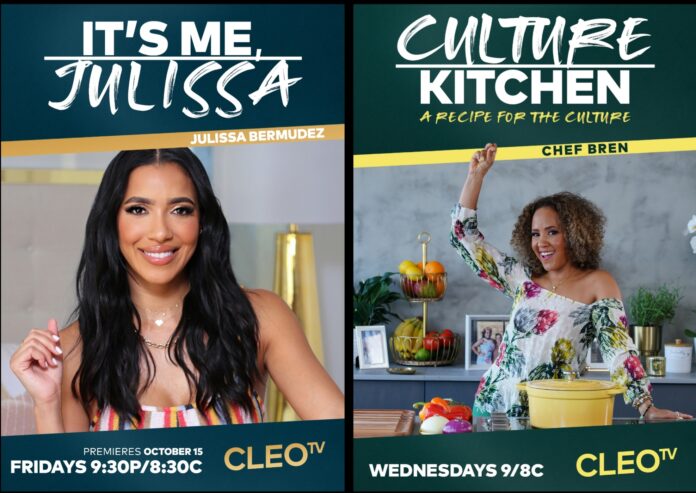 CLEO TV has been bringing an array of cultural and social programming that all people can watch comfortably at home or on their devices. They understand the assignment of the times that we are in, the faces that audiences need to see, and programming everyone can relate to. Celebrating Hispanic Heritage month, CLEO TV is premiering 2 new shows this fall and we are just as excited!

No stranger to the television screen, as a previous TV Host on 106 and Park, viewers are excited to see Julissa. Julissa is graciously sharing her story with the viewers from her early days as an immigrant from the Dominican Republic throughout her career. She focuses on her New York upbringing, discussing some of her life’s faux-pas, and the launch of her new body care brand República Skin. She is bringing something refreshing and familiar to TV One.

Chef Bren Herrera is an award-winning celebrity chef, TV personality, entrepreneur, actress, author with an infectious ability to curate and tell stories that matter. Born in Havana, Cuba, and raised in Washington, D.C. she fell in love with cooking at a young age as her Mom introduced her to the art of pressure cooking. After leaving a lofty career in law, Herrera turned to cooking as her way to celebrate her Afro-Cuban roots but also to entertain through dynamic experiences. In her very soulful kitchen, she combines Cuba’s vibrant plate, seeded in African, European, and Spanish culture and cuisine, with modern flavors and textures, to create memorable and smart dishes. She is the pressure-cooking Queen whose philosophy is to save time and energy so that you can spend precious time with your loved ones without sacrificing flavor and nutrition.

ENSPIRE had the chance to interview both ladies and talk about the excitement and relevance of their shows.

Cleo TV continues to set the bar high on diversity in programming. The traditional networks are still looking for the balance where TV One already has it figured out. Let’s continue to support those who support us and give representation for everyone.