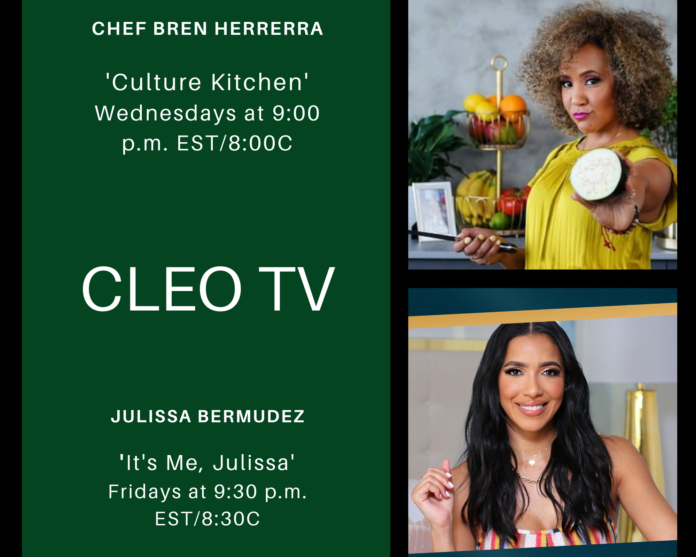 CLEO TV hosted a Virtual Sip and Chat with Chef Bren Herrera and Actress/Lifestyle Expert Julissa Bermudez, and ENSPIRE Magazine was there. The virtual event reintroduced fans to entertainment sweetheart Julissa Bermudez after years in the industry’s background hosting various shows and helping others tell their stories. Julissa, for most of us, is known from the BET Hit Show 106 & Park. The event also brought to the audience Chef Bren Herrerra, a D.C.-native who has an infectious personality and Afro-Latina flair, which brings bright, flavorful recipes, and stories from her travels abroad.

ENSPIRE Magazine’s Ese Ofhurie had the opportunity to speak with both Chef Bren and Julissa Bermudez during the virtual event. Recognizing their contribution to both the Black and Latinx cultures, she asked both women who were the people in their life who they would consider to be the most influential. Julissa has found motivation in many in the industry, notable names such as Daisy Fuentes, who broke barriers in television, becoming MTV’s first Latin VJ, and Jennifer Lopez, who continues to be a top name in the entertainment industry today. However, Julissa noted that though those are her celebrity influences, the most influential people in her life are her parents, who, through her life, she witnessed their hard work and dedication to take care of their family. Julissa continues by saying, look around at your immediate circle, and there you will find your best motivation. Chef Bren, too, agreed with looking around at your close circle and your surroundings, and it is there that you will discover soundbites, small pieces of information, or people here and there that will be motivational in your life. Chef Bren’s most influential person in her life is her mother, a Cuban refuge who came to America eight months pregnant, hardly speaking English, but managed to, through it all, figure it out and be the force behind the family to provide and hold it together. Chef Bren also made it an important point to inspire yourself.

Both Julissa and Chef Bren will bring a spark to CLEO TV’s lineup. It’s Me, Julissa airs on Fridays at 9:30 p.m. EST/8:30C, and Culture Kitchen with Chef Bren airs on Wednesdays at 9:00 p.m. EST/8:00C on CLEO TV. Be sure to tune into both shows and keep up with the latest on the ladies on Instagram, Julissa Bermudez / Chef Bren.

The full interview between ENSPIRE Magazine, Chef Bren, and Julissa is coming soon. Be sure to tune in by subscribing to the ENSPIRE Newsletter for the latest Entertainment and Community News.