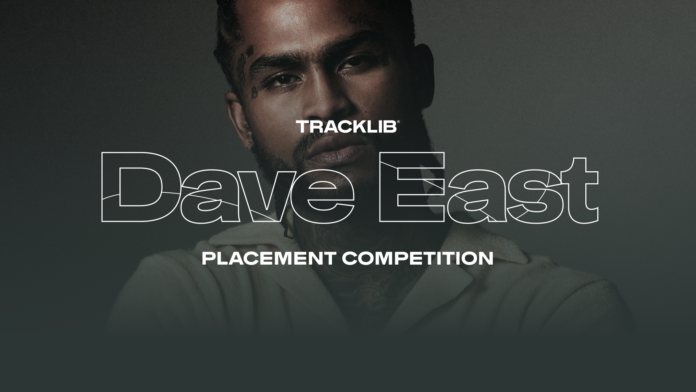 Rapper, songwriter, and actor Dave East has partnered with Tracklib for their Beat Battle Competition. Producers are able to create a sample using Tracklib’s extensive catalog of music samples and submit it for a chance to impress East. They will fly the winning producer to New York City to work on the track live and in-person with East. Also, they will receive standard writing credits and publishing on the song, sample clearance of the song they’ve sampled, and a one-year standard subscription to Tracklib. Tracklib will cover the flight and accommodations to New York from anywhere in the world.

East, who has collaborated with producers like Swizz Beatz, Timbaland, Harry Fraud, AraabMuzik, and more, see this as a chance for producers at all levels to showcase their ear for beats. “Tracklib gives you the opportunity to use samples that maybe you didn’t think you could use or find,” said Dave East. “Samples you never found before. I think it’s a great database to explore your own visions and push your creativity to the next level.”

To compete, creators must sample any song or multitrack on Tracklib and submit their beat by the end of the day of Sunday, January 23rd, 2022 through this link https://www.tracklib.com/blog/daveeast/ . The winner of the battle will be announced on all of Tracklib’s social media, in the Tracklib newsletter, and on the Tracklib blog page in March 2022. Dave East will shout out two runners-up on all socials and they will also receive a one-year subscription to Tracklib.

The winner of the beat battle will be announced on all Tracklib socials, in the Tracklib newsletter, and on the Tracklib blog page in March 2022. East will shout out two runners-up on all socials, who will also receive a one-year subscription to Tracklib.

Since Nas signed him to Mass Appeal Records in 2014, Dave East has worked with a long line of other talented artists, such as Pusha T, Jadakiss, 2 Chainz, Cam’ron, Jeezy, and Styles P. His studio debut album, Survival, featured an impressive line-up, including DJ Premier, Nas, Rick Ross, The-Dream, Fabolous, E-40, Max B, and Teyana Taylor. The album reached number 11 in the Billboard 200. Alongside his music career, East has delved into acting. He portrayed Method Man in “Wu-Tang Clan: An American Saga,” played Mister Ford in the Netflix film “Beats”, and he appeared as himself in Lil Dicky’s “Dave” comedy series.

Tracklib is the world’s first and only digital service for clearing samples, finally solving a huge problem in the music industry and leveling the playing field by making sample clearance accessible and affordable. Their catalog consists of over 100k all-original recordings from over 400 record labels/publishers around the world. The catalog includes everything from Isaac Hayes to Mozart and Jazz artists Bob James, whose music has been sampled in 1000s of songs. Samples from Tracklib have been used in major songs from artists like J. Cole, Phantogram, Mary J. Blige, Lil’ Wayne, DJ Khaled and BROCKHAMPTON.

Classic Hip-Hop Artists Join Together for Instagram ‘The “One Song” Classic...