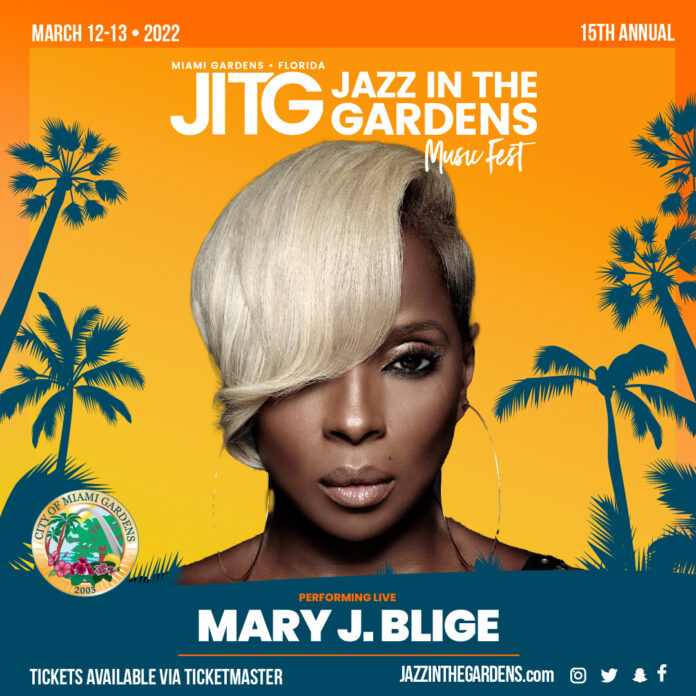 Superbowl 2022 enjoyed an electrifying performance by the incomparable Mary J. Blige who brought the hip-hop heat to a star-studded, fast-paced, powerful halftime show, joined by legends Snoop Dog and Doctor Dre. Blige, who recently released her album “Good Morning Gorgeous” to critical acclaim, will reprise her high energy show at the 15th Annual Jazz in the Gardens (JITG) Music Festival, which takes place on March 12 and 13, 2022. The R&B megastar, who also stars in the riveting Starz series “Power Book II”, is the only headline artist to perform three times in the festival’s 15-year history.

Jazz in the Gardens (JITG) full line up is Mary J. Blige, H.E.R, Rick Ross, The Isley Brothers, SWV, The Roots with special guest T-Pain, Stokely, Johnathan McReynolds, Mike Phillips and Mark Allen Felton, with local performers still to be announced. Syndicated radio host and comedian Rickey Smiley will return as the host for the 2022 JITG.

The 15th Annual Jazz in the Gardens also showcases an eclectic mix of goods and great buys in the Merchandise Village and delicious, exotic cuisine in the Food Village

About The City of Miami Gardens

The City of Miami Gardens celebrated its 18th anniversary in 2021 since its incorporation. With a population of approximately 113,000, it is the third-largest city in Miami-Dade County. Miami Gardens is a solid professional community of unique diversity. It is the largest predominantly African American municipality in Florida and boasts thousands of Caribbean and Hispanic Residents. The City is the home of the Hard Rock Stadium, the Miami Dolphins football team, the University of Miami Hurricanes football team, the Orange Bowl football game, the 2020 Super Bowl, and most recently the Miami Tennis open. It is also the home of the Miami Dolphins training camp. The City has demonstrated steady growth in the areas of community and economic development and has gained a reputation for being a premier destination in South Florida. The City is a 2020 All-America City. www.miamigardens-fl.gov

Monifah Tells Her Story Her Way!