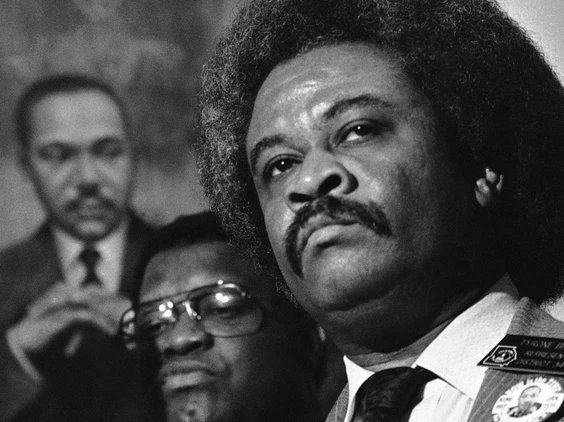 Tyrone Brooks was only fifteen years old when he joined a fight for civil rights that would change the trajectory of his life. He would soon become a key member of Dr. Martin Luther King’s Southern Christian Leadership Conference (SCLC) and worked his way up to becoming a full-time member. He was mentored by the giants of the Black revolution such as Dr. King, Hosea Williams, and Ralph David Abernathy to fight for racial equity and equality and has carried on their work. He began the fight for racial equality as an activist and aide to Dr. King at 15 and has continued on in Dr. King’s memory to keep fighting for social change.

“Tyrone: The Story of An American Statesman” will be released later in the fall of 2022 and feature a variety of influential figures in the Georgia business and political scenes and interviews of prominent dignitaries. His son, Tyrone Brooks Jr., is also heavily involved in the documentary’s making. The documentary will cover his story from working in the SDLC, the challenges he had to overcome, and the struggle for freedom and equality.

Brooks has spent most of his life fighting for racial equality on all levels. His dedication and work still continue today. In both March and April, he will march in Georgia and Alabama in honor of past anniversaries that are essential to the work of Dr. King.

Brooks has an important perspective on ‌how he looks at the world. He believes that the struggle for equality is forever and that the movement is not in the past tense; it existed yesterday, today, tomorrow, and forever. The goal is to make it so that future generations won’t have to work as hard. That doesn’t mean he isn’t optimistic about the future or that he isn’t aware of how much progress is being made.

There are many ways to become aware and take part in the struggle. That means writing, reading works from those before us, listening to others’ experiences, sharing your own, voting, spreading awareness on social media, and the list goes on. It’s up to you ‌how you want to be involved, but it’s something you must do if we are to live in a kinder world for our children and their children, and so on.

Brooks was first enlightened by the Civil Rights Movement at fifteen years old. He reflects back on how much has changed and how he has grown since then: “This is my life. This is my calling.” And although he has faced adversity and challenges many of us have not experienced, he still believes that God has blessed him: “I know that I am blessed. God has truly blessed me. I’m alive…I’ll never overcome the trauma of Dr. King, but I don’t want to overcome it, because otherwise, I wouldn’t have the passion. It’s a blessing in disguise to be energized to continue to keep fighting for what he did.”

The documentary on Brook’s life as a civil rights champion and politician is set for release in October 2022. It will detail his life and career as an activist who worked closely with Dr. King and their work to banish the racist Georgia Confederate flag.

The documentary will also provide a unique lens since Brooks’s son, Tyrone Brooks Jr., directed it. From noting the historic events his father experienced and witnessed, such as the assassination of John F. Kennedy and Dr. King, the fight to end segregation, and his father’s push to appoint more Black judges. Brooks Jr. describes how filming it was eye-opening, even for him: “The journey has been extremely illuminating. There are things you think you know about your parents, and then you hear things from other people that give you a completely different level of respect for who they are.”

In sharing his story, he hopes people will learn “how the youth began to rise up, take control and launch movements with no media or technology to push the message,” he said. “What we had was first-class training in nonviolent civil disobedience by attending SCLC Freedom Schools led by Dr. King, Dr. Abernathy, Reverend Hosea Williams, Dr. Dorothy Cotton, Reverend Andrew Young, Ms. Septima Clark, and others.”

For Tyrone Brooks, he wants others to learn from his story that “the struggle for racial equality and equity is real, and it has existed for centuries. If we continue to be silent at the polls, it will continue for centuries more.” Brooks reminds us that for everyone, the future is bright, we just have to work on it to get to those brighter days ahead.

It’s people like Tyrone Brooks that show us where we’ve been in order to know what we have to do next. As Brooks reminds us, “The struggle is forever,” so the work is never truly done. We can not be complacent or complicit with fighting all systems of oppression. To create a kinder, empathetic, and just world for all of us, we must vote, speak out, write, read, and fight for what we believe in.

If you’re interested in learning more about Brook’s civil rights work, check out more information on Facebook or check out the link to his upcoming documentary.