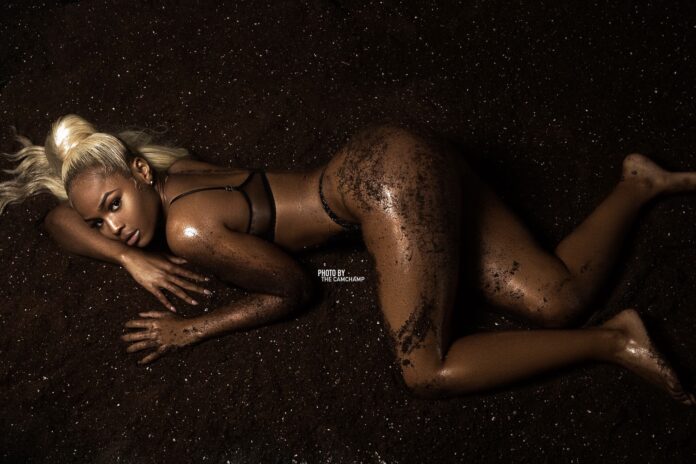 It’s the off-season for BET’s Hustle in Brooklyn but we caught up with Azia, one of the stars of the show to see what she has going on. Azia is using this time to put in that work, making appearances and pushing her new single ‘Plates With Snakes’ out now!

ESE: How was this year’s BET Awards weekend experience for you?

AZIA: The weekend was sooooo hectic! So I actually had a show in Shreveport, Louisiana the night before the awards and it was bomb! I opened up for Jon B and Whodini (Legendary stuff)! But yes it was bomb, then I drove back from LA to Houston caught a flight to Los Angeles first thing in the am but had a layover and the day went up in flames from there. LOL I finally land my bags missing finally get it, find out my dress didn’t arrive, had a fashion SOS and then finally got it together but missed the carpet. So that sucked but the awards were bomb!

E: Wow! See, it’s amazing how certain things happen out of your control to deter or discourage you. With all that happened, you did not let it discourage you. How important has it been for you since the TV Show to push through the small things?

A: Man it’s been super important to continue to push through! I think my biggest life lesson thus far and the one I’m most proudest to share is that I refuse to give up. I’m a fighter and I have tough skin and I trust in God and as my time approaches, I’m guided by a force bigger than me.

E: What was your favorite part of the awards show?

A: Lizzo was my fav part

E: Tell us about your new single

A: Yes, my new single is called Plates with Snakes! Super bomb, the video is so creative and hot and I came up with the direction and everything so I was really proud!

E: How does it feel to have this new single out and see your favorite and new artists perform for BET Awards weekend?

A: It’s super motivating!!! I just can’t wait until I get my shot to perform at the awards and shut it down!

Be sure to follow and check Azia’s new video!