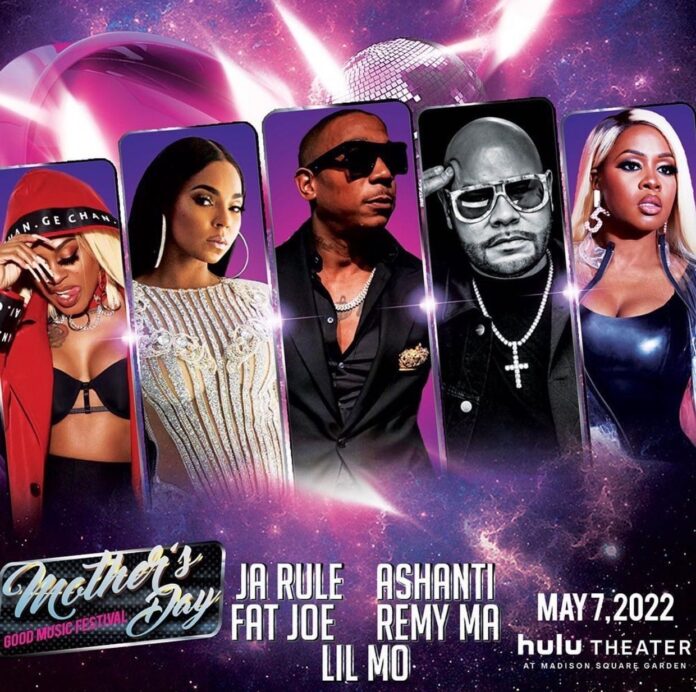 As part of the Mother’s Day Good Music Festival, SJ Presents an electrifying, all-star concert with New York’s hip-hop cultural icons representing the diverse flavors of New York – See JA RULE, ASHANTI, FAT JOE, REMY MA, and LIL’ MO as they come to Hulu Theater at MSG on Saturday, May 7, 2022, at 8 p.m. It’s time to get out and to some of the best.

See hitmakers: Ja Rule (“Always on Time”), Ashanti (“Foolish”), Joe (“Lean Back”), Remy Ma (“Ante Up”), Lil’ Mo (“Superwoman”). Four-time GRAMMY Award-nominated rapper and singer-songwriter Ja Rule has released six Top 10 albums, including Rule 3:36 and Pain Is Love. With those LPs and others, he’s earned a series of hit singles that made the Top 20 on the Billboard Hot 100 chart, including “Between Me and You” (with Christina Milian), “Ain’t It Funny” (with Jennifer Lopez), and three on which he collaborated with Ashanti: “Mesmerize,” “Wonderful,” and the GRAMMY-nominated No. 1 hit, “Always on Time.”

Singer-songwriter Ashanti, often referred to as the “Princess of Hip-Hop and R&B,” is known for vocals as sultry as they are sweet. Her debut album, Ashanti, won a 2003 GRAMMY for Best Contemporary R&B Album and spawned the smash hit single, “Foolish.” Since then, Ashanti has sold over 15 million records worldwide and produced more Billboard Hot 100 hits like “Rock Wit U” and “Rain on Me.” On her most recent LP, Braveheart, she continues her R&B journey, this time integrating touches of electro, trap, and urban pop.

Longtime friends and collaborators since the 90s, Fat Joe and Remy Ma will perform their solo hits and collaborations, including the GRAMMY-nominated “All The Way Up” single (Best Rap Performance and Best Song) and Joe’s #1 hit, “Lean Back.”

Related Articles: Mo’Nique & Friends are Back at The Apollo on May 11th, NE-YO & Keyshia Cole Live in Concert on Dec 1st at HULU