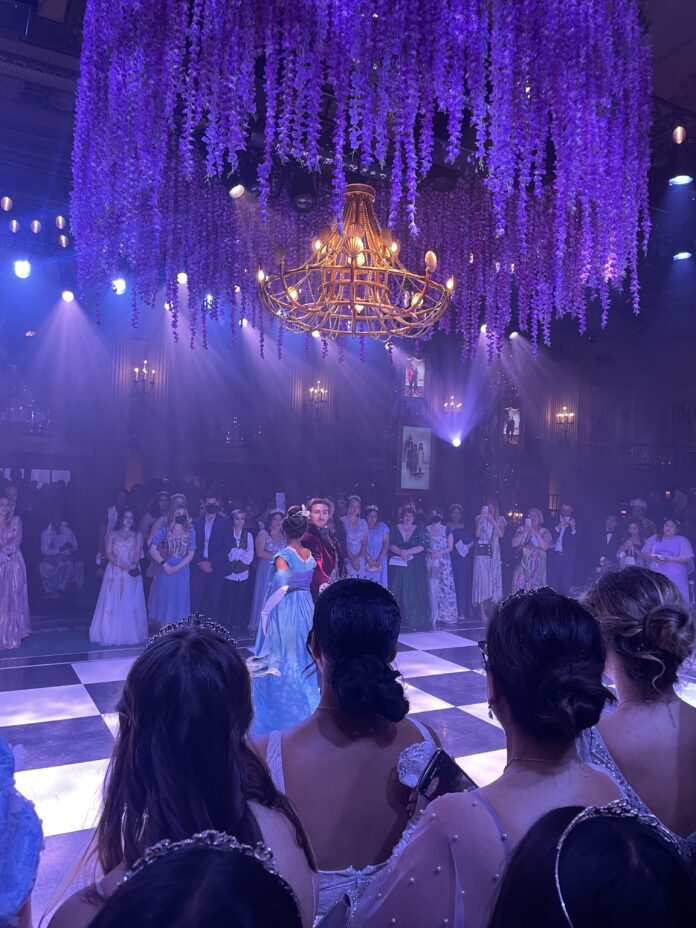 On Friday, June 3, I attended Netflix’s latest interactive experience based on their hit television show, “Bridgerton,” whose second season premiered earlier this year in March. “The Queen’s Ball: A Bridgerton Experience,” also known as the “Bridgerton ball,” is an 18+ event that has been occurring in five cities all over the United States and Canada, where attendees in Chicago, Los Angeles, Montreal, San Francisco, and Washington, D.C. transform themselves into the elegantly dressed of the Regency era and dance the night away.

I attended the Los Angeles event at the Millennium Biltmore Hotel, located right in the center of downtown. The experience started at 4:30 p.m., with attendees walking through a red velvet curtain and transporting into early 1800s London as you walked through a wisteria-covered walkway.

The first half-hour allowed attendees to walk around and admire all the elaborate decorations and interact with actors immersed in their roles as servants to the Queen, pompous aristocrats, and young ingenues who are aspiring “diamonds of the season.” Guests are also welcome to a variety of activities, including taking photos where you pose like you’re getting your portrait done, getting “Bridgerton”–themed cocktails at the bar, looking at displays of the costumes from the show, and even getting to meet and bow to the Queen herself.

The second half of the night guides the attendees into the ballroom, where a show is put on following a love story between two unnamed Regency-dressed suitors. Throughout the performance, there are opportunities for the guests to take part, including choreographed dance numbers taught by the performers, dancing with some ‌performers themselves — even one guest gets chosen as the “diamond of the evening!”

Overall, the event was spectacularly well done, and I couldn’t have asked for a more enchanting evening. I (and many of my friends who attended the event as well) would describe the experience as “Disneyland meets Prom.” You get to interact with characters dressed up in extravagant costumes, but you also get to dance to some of your favorite pop songs with a bunch of other young people.

There was a lot put into the 90-minute long experience, and while I wish it was ‌longer, it gave a good amount of time for guests to look around, take part in some ‌activities provided, and take everything in if you are present during your whole time slot. While I didn’t expect a full three-course meal to be served to everyone. It was a bit disappointing to not see any hors d’oeuvres included in the experience. It is understandable that food was not included since the times were not at traditional meal times, but the food is usually one of my favorite parts of any party!

The main things I enjoyed above all about the experience were everyone’s devotion to upholding the magic and its commitment to diversity. All the guests were so extravagantly dressed, and you could tell that everyone was dressing in their most authentic and beautiful versions of their selves. So many girls were wearing tiaras and guys wearing top hats with sparkly makeup, incredible dresses, and well-practiced bows and curtsies. You could tell how much this night meant to so many people, and the positive energy was contagious! So many strangers went up to each other and complimented their outfits, and overall, it was such a warm and welcoming environment where everyone was comfortable being themselves.

Attending the Los Angeles event, I was happy to see so much of the diversity of the city in the ballroom, in the guests and performers. I wore my mom’s sari to the event, and so many lovely South Asian women came up to me and my sister, complimenting us but also voicing their appreciation for us wearing cultural dress to the event. What I appreciated most about “Bridgerton”’s second season was their dedication to authentically representing Indian culture, especially having two South Asian leads. To feel that appreciation in the real world was extra special.

I highly recommend “The Queen’s Ball: A Bridgerton Experience” to anyone who can attend. Whether it is with a group of friends, a partner, or even by yourself, there’s something there for everyone to enjoy. You can learn more about the event at their official website here and follow them on Instagram here. Although the experience ended on June 12, there’s hope that the new season will bring the ball back even better than before!

Soul Legend Alexander O’Neal Teams Up With The Salvation Army &...