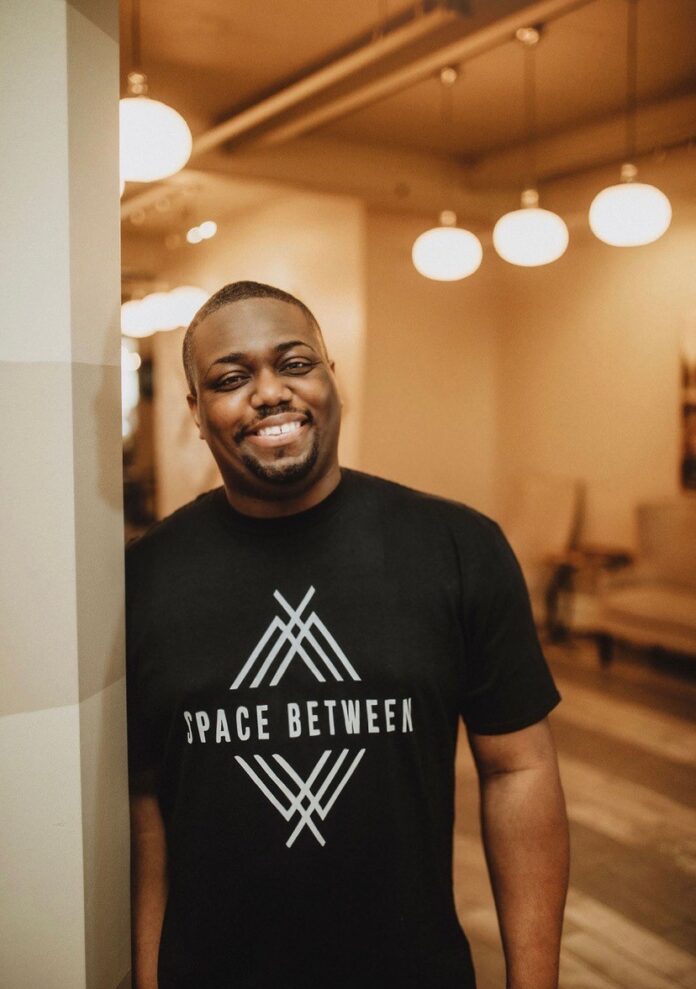 ( ENSPIRE Feature ) Jeriel Harvey Uses His Love for Words, Writing and Poetry to Build Self-Confidence and Make Change in Our Cities

Jeriel Harvey has always taken possession of his words and has used them to follow his passion for writing, which has led him to create his own recorded podcasts. Harvey grew up in a family that has been artistically gifted for generations and started his artistic journey at ‌4 years old. In high school, Harvey became interested in writing poetry and embraced this form of art. He never felt trapped in one creative style, so he learned many kinds of poetry, including haikus and free verse. Harvey stuck with poetry because it became a way for him to express his inner self and a way for him to build self-confidence.

Throughout his life Harvey has faced many challenges, including being victimized as a child, surviving hurricanes Katrina and Rita, and facing police brutality. Despite this, he has always stayed true to his individuality. Not only has Harvey used his words to help himself, but he has also used them to illuminate the lives of his readers. He has self-published 11 books that eventually debuted in the Top 100 of their respective categories. He also created two podcasts, known as “Black Canvas” and “Space Between.”

Along with these accomplishments, he has also interviewed Emmy-nominated Senior Correspondent Les Trent from Inside Edition, April Osteen Simons, Amanda LaCount, Scott Evan Davis, Olympian Kara Winger, and many more. Harvey has also helped others by receiving his license in Louisiana to become a professional counselor and becoming certified in trauma and grief. Harvey has continued to work on his goal of breaking the stigma around mental illnesses and rebuilding communities. His mission is to start and maintain conversations surrounding social issues. He has a goal of creating a non-profit organization dedicated to his deceased grandparents to help increase literacy in our cities to expand self-growth and development.

Jeriel spoke with ENSPIRE about his beginning interests in writing and his drive to use this talent to create change in our community:

Why did you become interested in creating podcasts and can you explain a little more about your two podcasts, “Black Canvas” and “Space Between”?

“When I decided to create “Black Canvas,” I was reminded of the state of the world in May 2020. We were witnessing a series of protests and civil unrest against police brutality and racism in America. Divisiveness was ever-present across media platforms. I wanted to spread light and happiness during a global pandemic and also spread a positive message of inclusiveness on a global platform. I researched many platforms, and I was intrigued by the “Anchor App.” “Black Canvas” was formed, and the rest was history.

“I like to refer to Black Canvas as an amazing first date and “Space Between” is the courting period in which you develop love and understanding through the process. “Space Between” was modeled after my favorite tv show growing up “MTV Unplugged.” I did not know of many individuals who were doing an audio-only podcast in which people sang live on this platform. I wanted to give my listeners the opportunity to have a behind-the-scenes ear to their favorite artists and learn more detailed facts they may have never known about their favorite songs. It was my way of giving back to the community and also giving us something to look forward to when life felt bleak.”

Why are poems so important to you and how have they impacted your life?

“I’ve always had a passion for writing since I was a little boy. Poetry has been my form of expression. Writing allowed me to interpret my feelings and thoughts on specific subjects that moved me. In poetry, I found the magic of metaphors and connected light through dark experiences by using creative expression. My grandfather, Frank Alex Davis Jr., was always someone who I admired. He loved me unconditionally and genuinely wanted the best for his family. He was not afforded the opportunity to complete high school or to attend college, but he instilled in me the importance of following my dreams. He passed away in February 2003 (a few months before I graduated High School), but his infectious smile and vibrant personality live through me every single day. I strive to find purpose through my pain and writing poetry has unlocked doors to the center of my heart.”

Growing up, in what way did your family allow you to express your creativity?

“My mother, Bernadine Harvey, always allowed me to express myself even when I appeared to be obstreperous. She never stifled my creativity and loved me through my stumbles in the road. I did not grow up with best confidence in the world, but through practice and loving moral support from specific family members, I developed into the man I am today.”

Could you describe more about your experience with two major hurricanes and police brutality in this country?

“Police brutality, by definition, is the excessive and unwarranted use of force by law enforcement against an individual or a group. It is an extreme form of police misconduct and is a civil rights violation. My mother and I were both survivors of an ordeal that still haunts me almost 17 years later. We were attempting to purchase food and medication for my grandmother, who was diagnosed with dementia, during the catastrophic hurricane known as Katrina. We were racially profiled and called an expletive that I have chosen to never repeat. Rifles were drawn at our heads and our car was searched for stolen items that did not exist.

“The police later attempted to cover their mistake by saying our vehicle matched the description of another vehicle they were searching for. But this ordeal profoundly changed my viewpoint on life. I do not hate or have ill-will toward the people who have sworn to protect and serve. I just felt hurt and mortified by the specific individuals who negatively impacted my life on that day. I have forgiven them and given it to my Higher Power. Being a survivor of both Hurricanes Katrina, and Rita, and going through this experience allowed me to regain my life. I appreciated nature. I spent time with family members and friends that I lost connection with, and I decided to finish school. I was given grace by God, and I use each second I am alive to find peace in the pieces of life.”

How did these specific experiences and other experiences shape how you are today and your perspective on the world?

“I personally believe that even an experience that is not monumental has the opportunity to change us. It could create a chain reaction of how we act on a specific day and how we view life. My identity has become a collection of my experiences. What are the stories we tell ourselves about our experiences? That is what affects who we are, future decisions we make, and how we interact with others.”

Jeriel Harvey’s passion and love for words have allowed him to ‌make positive changes for future generations. Through his love of poetry, he could publish books and record podcasts that inspire people to embrace their individuality and use it to make a difference in their community. Harvey could build up his self-confidence after multiple hardships and took the feelings he had during those difficult times and used them to do something positive. With many goals and plans laid out for the future, Harvey will use his dedication to fix social issues and bring more awareness to mental illnesses, so that future generations do not have to face the same things Harvey did.

To learn more about Jeriel Harvey and listen to his podcast, “Blank Canvas”, check it out here here. Also, check out his other podcast “Space Between” here.