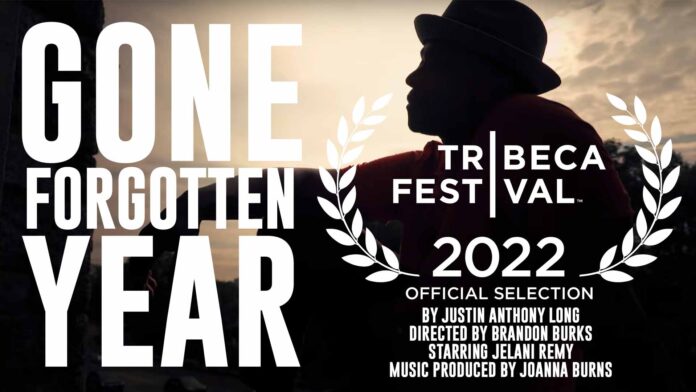 Justin Anthony Long is one of the many creative minds behind the latest queer love story, “Gone Forgotten Year,” which premiered at the Tribeca Film Festival in New York City on Sunday, June 12. The heartfelt music video tells an inspiring story that is more relevant now than ever.

“Gone Forgotten Year” follows a pair of lovers who, due to the COVID-19 pandemic, are separated from each other. The music video captures their reunion after a year apart, openly embracing the idea that absence makes the heart grow fonder. The music video stars two incredibly talented Black Gay Broadway artists Jelani Remy, who is the voice behind the song and has performed in shows like “Ain’t Too Proud’ and “The Lion King,” and Josh Breckenridge, who has been part of iconic shows like ‘Come From Away” and “The Scottsboro Boys.” The behind-the-scenes crew of the music video is also inclusive and brimming with diversity. Director and choreographer Brandon Burks is a Queer Black artist who is part of the team behind Printboy Magazine, a gender, and sexuality-inclusive digital publication; and Joanna Burks is an up-and-coming Lesbian music producer, who worked alongside Long in making the record the best version it can be.

ENSPIRE Magazine talked to Justin Anthony Long about the inspiration behind the song, the music video concept, and its importance to the LGBTQ+ community.

How did this song, “Gone Forgotten Year,” come to be? What first inspired the idea for this song?

In February 2021, I sat down at the piano and started playing some chords and melodies that suggested a new beginning or an emergence from a heavy, somber time into something bright. As I found my way through musically, I realized this is a pop anthem about the moment. The vaccines were rolling out, and I started to feel something I hadn’t for a long while…hope.

I was very lucky to be quarantined during the pandemic with my partner of 18 years. On the days I felt really down or lost, he picked me up and got me through, and I did the same for him. Not everyone was as lucky as us. So I let my mind wander and dream up the idea of two lovers separated during the pandemic and this being the moment when they are finally able to reconnect.

How have your own observations about interactions post-pandemic contributed to the making of this song/music video?

Post-pandemic, when I see the important people in my life, my partner, my family, and my good friends, I just want to hold them close and never let go. Just like the two lovers in the music video, it’s important to reconnect, laugh together, love together, and celebrate every day because, as we’ve all recently learned, everything can change in the blink of an eye.

“Gone Forgotten Year” features an impressive list of cast and crew with many accolades to their names. What was the casting/hiring process like for this music video? How has the Broadway community specifically been a supportive part of the project?

It started with calls to good friends and frequent collaborators!

I was so fortunate to have such an incredible team behind this song and music video. From the moment the song was written, I knew I wanted my good friend, Jelani Remy, to sing it. Jelani and I went to Montclair State University together and studied theatre. Since graduating, we’ve creatively collaborated in other ways, with him choreographing an original musical I wrote book & lyrics for called “Cookie Soirée,” and he choreographed a production of “Disney’s High School Musical!” that I directed. So he’s not only an incredible singer and actor lighting up the Broadway stage most recently in “Ain’t Too Proud,” he has so many talents. I’ve always wanted to write something that would feature him, and here was the perfect song.

The next piece was finding a music producer to really take the song to the next level, and there was no one better than my good friend and frequent creative collaborator, Joanna Burns, who produced the song and did the arrangement. Joanna is also an incredible composer in her own right — she’s composed music for an original musical I co-wrote book & lyrics for called “Welcome to Shoofly” (ASCAP/DreamWorks Musical Theatre Workshop) and for “City of Dreams,” a musical web-series I co-wrote. Joanna is a musical force!

I met our incredible Director/Choreographer, Brandon Burks while performing on the Norwegian Escape. He was in “After Midnight,” and I was in “For the Record’s The Brat Pack.” That was back in 2017, I believe. Fast forward several years, and I noticed on social media that Brandon was directing dance videos and thought… maybe he’d be interested. So we talked about the song and what was important to the two of us, and it all clicked. Brandon brought a beautiful balance of grounded truthfulness with heightened dance celebration.

After Brandon, Joanna, and Jelani were onboard, we had to figure out who might play Jelani’s lover. We knew onscreen chemistry would be important and need to be “there” quickly, so all the co-actor recommendations came from Jelani. Josh Breckenridge (“Come From Away”), who we ultimately cast, was almost unable to do it! But after we postponed shoot dates, Josh was back in NYC and able to sign on! And I’m so happy it worked out because the chemistry between him and Jelani is truly beautiful.

At first, I was hoping to hire a production company to shoot the video, but when I quickly realized I wouldn’t have the budget, I packed my camera, gimbal, and some lighting, got on a plane to NYC, and was the DP, lighting, the crew. I also edited the video. This was truly a labor of love and very special to me…Not only the creation but working together with these incredible artists who I’m also very lucky to call my friends.

The Broadway community has been very supportive. Brandon assembled an A-list team of dancers, many of whom are on Broadway or Broadway National Tours at this very moment. And Broadway Director Michael Arden was even generous enough to meet with Brandon, and I one day to offer some mentorship and advice when shooting.

LGBTQ+ representation in the media gets caught in trauma-based narratives where queer-identifying characters suffer more than prosper — even more for those in the Black community. How does “Gone Forgotten Year” escape this narrative, and why is a positive representation in LGBTQ+-based media important to you?

As a queer person, I’ve become numb to tragic stories about our community. It is important to understand and acknowledge the real traumas LGBTQ+ people face. It’s also important to embrace that so much happens after we come out of the closet and before we’re six feet in the ground. “Gone Forgotten Year” is a celebration of the JOYS of queer love and, more specifically in the music video, the JOYS of queer Black love.

Positive LGBTQ+ representation in the media is deeply important to me. I grew up in a time when we didn’t have “Heartstopper” or “Love, Simon.” It wasn’t until I saw “Will And Grace” that I saw what a healthy, happy, adult gay life could be. Before that, the queer stories I had seen were shrouded in tragedy and trauma. We can change the narrative. Positive portrayals of queer people are essential so that we can envision long, happy, healthy futures full of love and abundance. We all deserve the right to imagine a beautiful future.

What’s next for you? Are there any projects coming for you/ideas you hope to flourish in the upcoming year?

Speaking of queer love and joy…

The next thing I’m about to do is to start pitching a queer musical sitcom that I created and wrote the pilot for called “The Jewel Box.” I’ve got some great producers onboard, and we’re taking it to market this summer. This show is a joyful noise that celebrates queer love, the chosen family, and, quite literally, sings and dances. I can’t say too much about it just yet except that it’s a musical! It’s my deepest wish that it’ll make it off the page and onto your television screens in 2023.

“Gone Forgotten Year” is a visually intoxicating masterpiece and will make viewers feel warm and fuzzy by the end. Authentic and heartfelt love is at the center of this music video, and it’s clear how much this artwork means to its creators. You can learn more and get in contact with the “Gone Forgotten Year” team on Tribeca’s official website here and watch the music video on Youtube now here.

Get Into Designing and Dining with CLEO TV

DJ Fly Guy Gives a Voice To the Voiceless