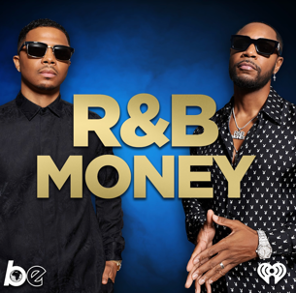 The new Black Effect podcast, “R&B Money,” is hosted by the Legendary Grammy Nominated R&B singer-songwriter-producer TANK and his business partner, multi-platinum singer-songwriter-music executive J. Valentine. From iHeartMedia and Charlamagne tha God’s Black Effect Podcast Network, this podcast is for the super dedicated R&B fans, highlighting everything from Marvin Gaye to Pink Sweat$. R&B Money has produced an exciting space for artists & executives in the game to reminisce with exceptionally compelling storytelling while building a place of discovery for the fans.

Tank is a multi-Grammy nominated platinum-selling R&B singer-songwriter, record producer, and actor. He is known for his chart-topping singles “Maybe I Deserve,” “Please Don’t Go,” and “When We.” Tank’s songwriting and production credits include working with Aaliyah, Beyoncé, Fantasia Barrino, Kelly Rowland, Omarion, Jamie Foxx, Alicia Keys, and many more. Through the course of his career, Tank has also appeared in several TV shows and films, including HBO’s Togetherness, TVOne’s “Born Again Virgin,” Lifetime’s “Lust,” and BET’s record-breaking movie “The New Edition Story.”

J. Valentine is a multi-platinum singer-songwriter and music executive. He has written songs for the likes of artists including Tyrese, Mario, Keyshia Cole, Omarion, and the title track to N’Sync’s 9x platinum Celebrity album, which sold 1.8 million in the first week. Along with managing Tank, he also co-founded the Underdogs with Harvey Mason Jr. and Damon Thomas before consulting at Interscope Records and Motown Records.

Listen to the first episode here.