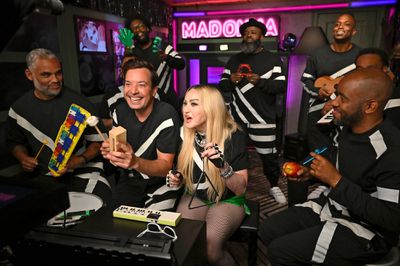 Madonna guest starred on The Tonight Show on August 10 to chat with Jimmy Fallon about her career and sang her popular single “Music” using classroom instruments.

Madonna is seen singing as she plays the triangle, while Fallon and The Roots shared backup vocals and played along with instruments such as a wooden block, a xylophone, clappers, and many more.

The segment features a pre-recorded clip of everyone jamming to the song, and then frequently cuts to clips of them with a backlight that illuminated their outfits, instruments, and sunglasses in bright neon colors.

It had been a while since The Tonight Show performed their “Classroom Instruments” segment because of COVID-19. The last performance was in April 2021 and all the sound bites were filmed separately to respect social distancing.

Madonna announced she will release “Finally Enough Love” on August 19, which will be a collection of her 50 tracks that took the No. 1 spot on the Dance Club Songs chart.

Related Articles: Nicki Minaj is a ‘Super Freaky Girl’ in New Single, Megan Thee Stallion’s New Album Traumazine is Top 10 in the US