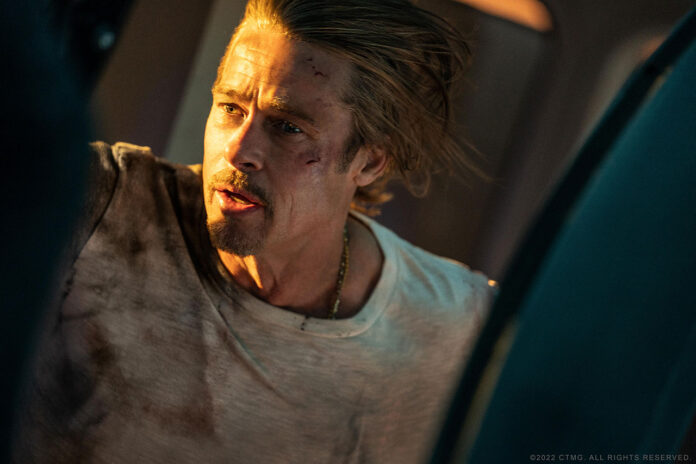 Today, Bullet Train came speeding straight into theaters. In Bullet Train, Brad Pitt stars as Ladybug, an unlucky assassin determined to do his job peacefully after one too many gigs gone off the rails. Fate, however, may have other plans, as Ladybug’s latest mission puts him on a collision course with lethal adversaries from around the globe—all with connected, yet conflicting, objectives—on the world’s fastest train. The end of the line is just the beginning in this non-stop thrill-ride through modern-day Japan from David Leitch, the director of Deadpool 2.

And change it certainly did. In Thursday US previews alone, Bullet Train made $4.6 million and is expected to bring in $30 million this weekend. Globally, predictions for this weekend are as high as $60 million! And while critics feel mixed about the film, currently sitting at 52% on Rotten Tomatoes, audiences already can’t get enough of it. This can be seen in Rotten Tomatoes’s 83% audience score.

Bullet Train is based on the book Maria Beetle by Kōtarō Isaka, which became Bullet Train when the riveting novel was translated into English. The new Bullet Train film also takes inspiration from other sources. In an interview with Yahoo Entertainment, Brad Pitt shared that he and director David Leitch “had a lot of talks about Jackie Chan and how much we admire what he’s doing.” Jackie Chan’s iconic style of incorporating humor into action-packed sequences heavily influenced Leitch and the film.

While Brad Pitt is the undeniable star of the film, his costars are critical to the fun banter and intense mystery of Bullet Train. You can look forward to seeing Joey King, Aaron Taylor-Johnson, Brian Tyree Henry, Andrew Koji, Hiroyuki Sanada, Michael Shannon, Benito A Martínez Ocasio, and Sandra Bullock bring a diverse cast of characters to life.