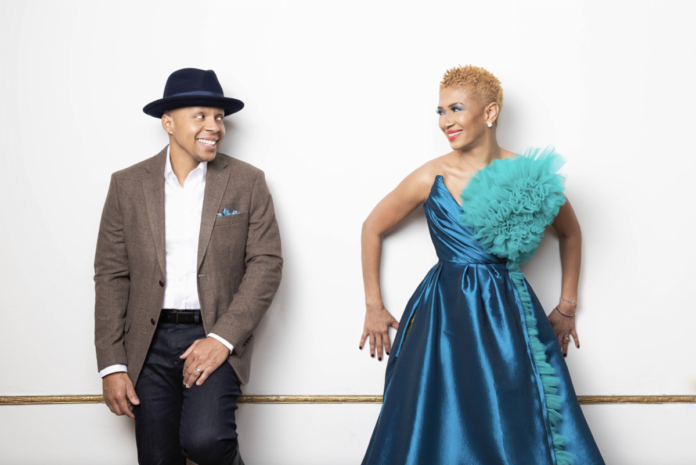 The Baylor Project announced the release of their new live album The Evening: Live at APPARATUS. The album is a recording of the magical weekend the duo performed at APPARATUS — an interdisciplinary design studio in NYC. The album, via Be A Light, in collaboration with Motown Gospel, will be released on September 2, 2022.

For three immersive nights, the duo performed at MUMS, an ephemeral jazz club created within APPARATUS’ gallery. The club was part of APPARATUS’ Artistic Director, Gabriel Hendifar’s, latest collection titled Act Four. The collection, taking inspiration from cultural touchpoints of the 1960s and jazz music of that era, required a musical muse for its jazz club. After seeing a video of the duo’s riveting performance of “We Swing,” Hendifar found his muses.

Being the children of pastors, both Jean Baylor and Marcus Baylor experienced first-hand the sublime and restorative power of music. This lived experience translates over not only through their music but through their marvelous live shows. Audience members often leave feeling a familial connection with one another.

“We create moments that feel like mirages. They are here for a moment in time, and then they’re gone. We invite you to step into a dream and part of the magic is that it’s only going to happen once – the dream disappears,” says Hendifar. The album is the preservation of those three magical nights, and listeners are invited to partake in that phenomenal weekend.

The setlist performed at APPARATUS features songs from various releases throughout their artistic career. Included are songs from their 2017 debut album The Journey and their most recent album Generations. Both albums received critical acclaim. The Journey debuted in the top ten on the Billboard Jazz Chart and garnered two GRAMMY® nominations, and Generations gained them another GRAMMY® nod and won the NAACP Image Award for Best Jazz Vocal Album.

While we anxiously wait for the release of The Evening: Live at APPARATUS, listen to past releases on any major streaming platform or below. Visit The Baylor Project’s official website for more information on upcoming concerts, merchandise, and more!

Legendary Damon Celebrates His Birthday with a Star-Studded Bash at Sunset...