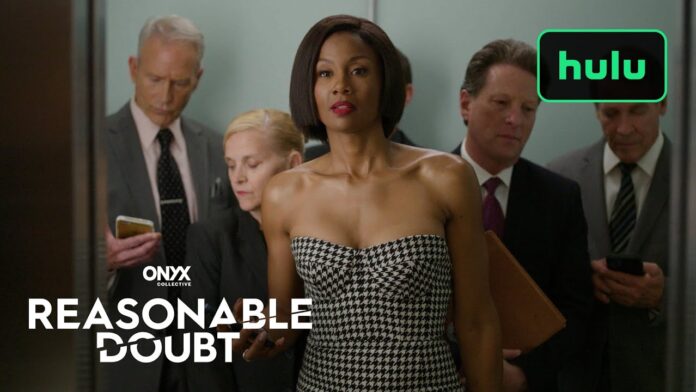 Most known for her flair and talent on Scandal, Kerry Washington is back to Television as a Director and Executive Producer alongside Showrunner, Raamala Mohammad for the highly anticipated legal drama on Hulu. Premiered on September 27, 2022, allied Multicultural is working with Onyx Collective for their scripted series debut of Reasonable Doubt with a dynamic all-black writers’ room. The series stars Emayatzy Corinealdi as Jacqueline “Jax” Stewart, who embodies the life of a high-powered criminal defense attorney in Los Angeles.

The successful and the messy, the streets and the suites, the new series follows Jax in an exciting and sexy legal drama. New and old faces are forcing Jax to confront truths she has been running away from, breaking down her strong exterior to reveal vulnerabilities and get in touch with distant emotions. This series also spotlights many other talents including, but not limited to Emayatzy Corinealdi (Miles Ahead, The Red Line, Roots, Ballers), Michael Ealy (The Devil You Know , Bel-Air, Takers, Being Mary Jane), and McKinley Freeman (Our Kind Of People, Queen Sugar, Titans Pump).

The show is heavily inspired by Jay-Z’s debut album Reasonable Doubt and therefore each episode’s title and the show’s name itself is motivated and influenced by the music in the album. Jay-Z was a major inspiration for this show because of the black motivation behind the series, and showcasing different “Hova” songs for each episode was definitely a major artistic contributor to the plot.

Reasonable Doubt premiered its first 2 episodes on Tuesday, September 27, 2022, and is followed by weekly episodes. Watch the official trailer here:

Related Articles: NE-YO & Keyshia Cole Live in Concert on Dec 1st at HULU, A Politically Charged Episode of “Black-ish” That was Shelved to Air on Hulu

Rising Stars Shows “Fear Has No Place” in the Present