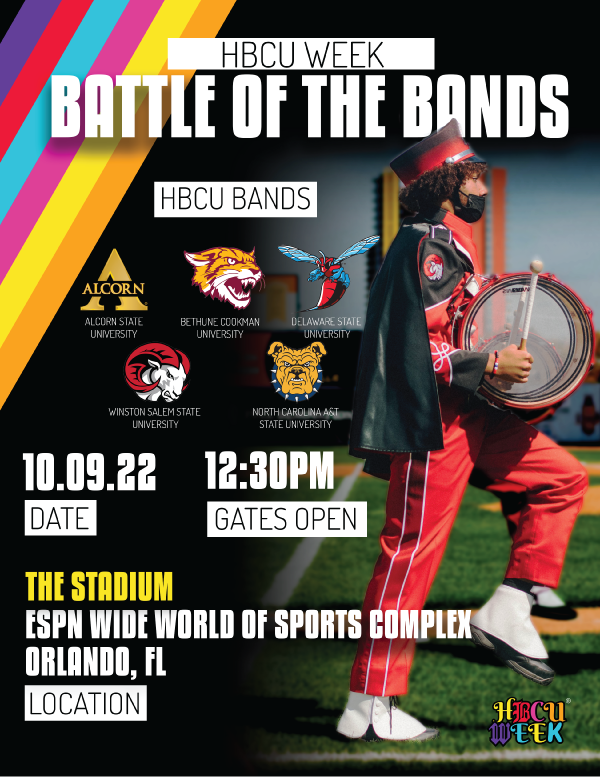 Coming up in the first week of October, Disney will host one of the biggest HBCU events at the Disney World Resort. Conducted by the HBCU Week Foundation, the event looks to garner more attention and attraction with its location in one of Disney’s Magical Parks. The event is jam-packed with activities such as an HBCU band parade on Main Street, a Battle of the Bands competition, and an HBCU college fair. ESPN will also make an appearance with a live broadcast of, “First Take”, featuring HBCU Week Foundation’s ambassador Stephen A. Smith and the show’s host Molly Qerim. Over 5 thousand students will attend, and over 50 HBCUs will be present at both the event and to take part in the college fair within it.

Started by Ashley Christopher in 2017, HBCU Week Foundation hosts several nationwide college events with the goal to provide scholarships and opportunities to high schoolers while also providing entertainment to keep the events lively. Just last month, the Wilmington event showcased talents such as Rick Ross, Mya, and comedian Michael Blackson in concerts and comedy shows. This event, however, is focused more on the school spirit aspect of HBCUs, with the Battle of the Bands roster of Delaware State, Bethune Cookman, North Carolina A&T, Winston-Salem State, and Alcorn University. These are the bands that will march in the parade on Main Street as well. With Bethune Cookman and North Carolina A&T being in the top 10 of HBCU Division I Bands, the Battle of the Bands event will be a show to remember.

School spirit, or rather, school appreciation is the underlying motivation for these annual HBCU events. The goal of the foundation is not only to provide education but to show the rich culture in which HBCUs were founded and why they are a meaningful and fundamental part of the community today. That is a significant reason that the foundation has partnered with Disney, whose “Disney on the Yard” program partners with HBCUs intending to incorporate Black employee talent in career and mentorship, as well as provide internship and scholarship opportunities. That is what the HBCU Week foundation sets out to do in the end, create job opportunities and stabilize the undergrad to career pipeline that is hard to navigate in today’s society.  Just this last year, the HBCU Week Foundation awarded over 10 million dollars in scholarships, along with over 5 hundred combined partial and full-ride scholarships offered to high school seniors.

With top ranking bands, a variety of well-known HBCUs, and ESPN’s own Stephen Smith, this event will surely be as successful as the Wilmington turnout last month. The success, however, does not come from the number of students in attendance of course, but rather the number of students that can be given the chance to attend a university and have an experience that they will thoroughly enjoy. While the HBCU Event Foundation has previously awarded over 10 million dollars in scholarships, they hope with this big of an event, paired with the notoriety of the Disney brand, they can break their record and supply an even greater number of students with the experience that comes with attending an HBCU.

Prices for tickets, admission, and hotels can be found at www.hbcuweek.org