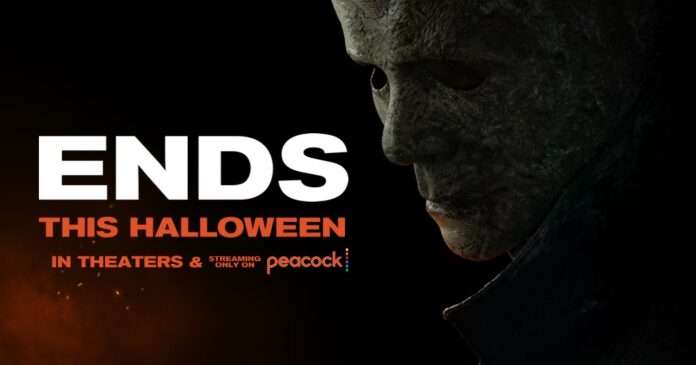 The original Halloween was released in 1978. Since then, there have been 12 sequels. This lineup includes Rob Zombie’s origin story of the killer Michael Myers and a retcon (retroactive continuity) of the previous sequels. Each installment has seen box office success, with 2021’s Halloween Kills generating over $131 million on a budget of $20 million. Fans watching from the beginning will witness the end of a franchise spanning their lifetime. Younger fans have a chance to catch up before the release. No matter how you were exposed to the series, Halloween Ends should not be missed.

Halloween Ends follows Laurie Strode (Jamie Lee Curtis), as she writes her memoir while coping with PTSD. It has been four years since her last encounter with Michael Myers (Jame Jude Courtney and Nick Castle). Previously, she inspired the town of Haddonfield to unite against Michael, who escapes after yet another massacre. If the trailers for the previous movies didn’t, this newest one takes it one step further. “Come and get me,” she says, as she undoes the locks on her door. Halloween Ends is more than a slasher, more than a finale – it’s closure. No matter what happens, the rivalry between Laurie and Michael will end.

The first trailer was released earlier than intended on July 19, because of a leak. On September 27, the final trailer was released. Producer Jason Blum repeatedly insists the film will be the last Halloween film under Blumhouse, and not the last film of the franchise. He explains, “Let me explain the movie business to you: if you take a dollar sign and attach it to anything, there will be somebody who wants to do a sequel. It will live.”

Horror movies, such as the Halloween franchise, have loyal and dedicated fans that allow for multiple sequels. Jason Blum (simplistically) explains the main reasoning behind the movie industry, as cult-like fanbases will show up in droves to view their favorite slasher.

Halloween Ends will be released on October 14 and streamed on the paid tiers of Peacock for 60 days.

Callie Reiff New Hit Single “What Ifs” Takes Us on a...