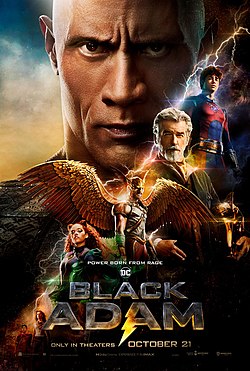 Adding to his many roles and broadening his talent, Dwayne “The Rock” Johnson will be in theaters as Black Adam on Friday, October 21. Black Adam is a spin-off of Shazam and features other talents, such as director Jaume Collet-Sera (Jungle Cruise), Pierce Brosnan (Mamma Mia!), and Aldis Hodge (Straight Outta Compton). Dwayne Johnson has reached a level of fame not seen by other celebrities. He is known not only as an actor but also as a former football player and WWE wrestler, producer, and businessman. He also has a line of Samoa-influenced Zoa energy drinks and Teremana Tequila. Black Adam features Johnson as a conflicted antihero with a twisted sense of justice.

Black Adam is the long-awaited eleventh film in the DC Extended Universe. Dwayne Johnson was initially supposed to feature in 2017’s Shazam! Because of The Rock’s pressure on its executive producers, Black Adam now has his own platform instead of debuting alongside Shazam. Johnson described the dual debut as “an incredible disservice” to the character. Originally, Adam Szytkiel wrote the script. However, during the COVID-19 pandemic, the script was rewritten by Rory Haines and Sohrab Noshirvani. The film features Aldis Hodge as Hawkman, and James Bond star Pierce Brosnan as Dr. Fate. Former Disney actor Noah Centineo is Atom Smasher and Sarah Shahi is cast as Cyclone.

Formerly, Black Adam was an enslaved person named Teth-Adam in the land of Kahndaq. He was given the powers of the gods and subsequently used them for vengeance. This resulted in his five-thousand-year imprisonment. Later, he is only remembered as a legend until the Justice Society of America takes interest in him.

Johnson’s role is unique in Black Adam because it is his first time playing the role of a villain, at least for a little while. Aside from lending his voice as Krypto in DC League of Super Pets, Johnson never played a superhero. He mostly plays heroic and hypermasculine roles, which are seen in previous films like Skyscraper, Hobbs & Shaw, and Journey 2: Mysterious Island. This is OK, though. The Rock is ultimately known as a humble person, which heavily contrasts with the living god Black Adam.

ESPNW Will Be Hosting Their 10th Annual Women + Sports Summit

2 Chainz Uses Self-Owned Escobar Restaurant to Feed the Homeless in...