Terrell Cooper grew up in a barbecue family. While some families gather around the television each evening, Cooper’s gathered around the grill. The family’s fondness of barbecue was inherited from their grandfather, John Tom Branson. Branson kept their bellies and hearts full by sharing his rich, savory barbecue recipes.

“People would drive by and ask if he was cooking on the weekends, and we were grateful to wake up to the smell of hickory and charcoal smoke permeating through the windows,” Cooper said. “Some families grabbed cleats, helmets, and shoulder pads on the weekends, but we grabbed aprons, spoons, ball jars, axes, logs of wood, and charcoal.” 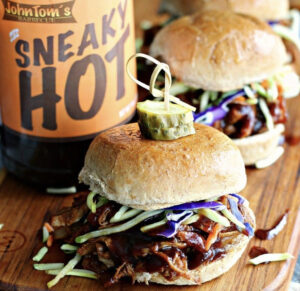 John Tom Branson loved to barbecue and was a master at crafting it. He built his own barbecue smoker to smoke his meats and crafted his own original bbq sauce recipe. After moving from Mississippi to Indiana in search of employment opportunities, the local community quickly noticed his love and talent for barbecue, especially his delicious sauce. He shared his food with family and neighbors alike.

Terrell Cooper spent much of his youth helping his grandfather, John Tom Branson, cook mouth-watering barbecue; it was a savory sauce with a hickory taste and just a hint of sweetness. One could taste the vinegar, garlic, and onion dancing together. Even in adulthood, Terrell Cooper can still taste his grandfather’s sauce lingering on his tongue. Cooper spent five years chasing John Tom’s illusive barbecue sauce recipe. He even called family members with a more vivid recollection of the recipe for help.

“Before my first attempt, I called two of my aunties, Faye and Terri, and asked them if I was missing some ingredients. They filled in the gaps on a couple of things I had missed. They seemed excited that I was trying to bring back my grandfather’s recipe to the family,” Cooper said.

Cooper had failed attempt after failed attempt… but along the way, he ended up creating his own flavorful concoction. Cooper’s sauce incorporated herbs, brown sugar, and a bit of fruit juice to make a finely balanced flavor that’s sweeter than his grandfather’s original recipe. Terrell Cooper, Lathay Pegues (another grandson of John Tom’s), and Rodney Robinson created “John Tom’s Barbecue” to sell bottles of this original recipe. Just like that, the family was brought together around barbecue sauce once again. This time, the family was happy to collaborate as both cooks and business partners. 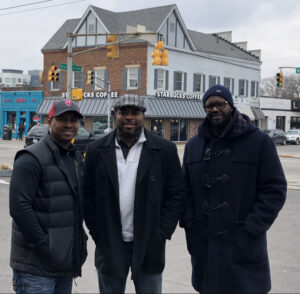 “A host of intangibles come from running a business with family, like the shared values of trust, mutual respect, and our ability to be authentic with one another,” Cooper said. “We have each other’s back, so finding that mutual level of support is more effortless.”

The community has taken the same interest in Cooper’s recipe as they did in his grandfather’s original. John Tom’s Barbecue is available across Indiana at locations such as Target, Krogers, Fresh Thyme, and many others. They also orchestrate a number of local events, hosting mixers that showcase their latest dishes and sauces or sponsoring the latest town festivals. It’s their way of showing their appreciation to the community.

But to Cooper and his family, cooking is always an event.

“And as we’ve gotten older, we gained respect for all cuisines, so cooking has become an “event” to us, somewhat of a therapeutic event,” Cooper said. “Spending time in the kitchen, having a glass of wine, and listening to jazz while preparing a meal? That’s a special place. It’s tranquil.”

Though the sauce might not have been his original recipe, John Tom’s legacy lives on through the joy his grandsons’ barbecue sauce has brought so many people. A taste of his grandfather’s original recipe still finds its way onto the plates of families across the country. If you want to try John Tom’s sauce for yourself, you can order some here on their website.