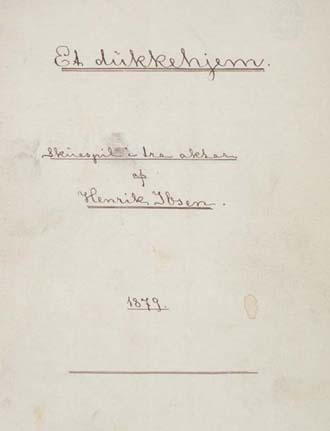 ( ENSPIRE Entertainment ) An Old Production Given New Flair on Broadway

On November 16, the Jamie Lloyd Company announced that Academy Award-winning actress Jessica Chastain will arrive on Broadway as Nora Helmer in “A Doll’s House.” The play originally premiered in 1879. It went beyond the theater, becoming engrained in newspapers and conversation. Now, a century-and-a-half later, the Tony Award nominee Jamie Lloyd and acclaimed playwright Amy Herzog will refresh the story. Chastain will re-energize an already-shocking play for a whole new generation.

The original version of “A Doll’s House” premiered in the Royal Theatre in Copenhagen, Denmark in 1879. Playwright Henrik Ibsen denies it was his intention to produce a feminist play, but audiences view it that way. The play eventually became so controversial that an alternate ending was performed for its German premiere. The rewrite implies that Nora Helmer stays with her family, instead of leaving them. Further, audiences and critics regarded the play as scandalous, being that it questions the roles of men and women in the family.

Explaining her aspirations, Jessica Chastain says, “While home in New York, walking around the empty theater district made my heart hurt. New York has been my home for over 20 years and it’s immensely important to me to take care of this city and support my artist neighbors.”

She continues, “So, I couldn’t be happier to play Nora in A Doll’s House on Broadway! I’m very excited to work with Jamie and the incredible Amy Herzog in this city that formed me. I hope in the future to work in the West End but for now I can’t wait to be together with all of the wonderful people of New York and my artistic community on Broadway.”

Rehearsals for “A Doll’s House” were set to begin in London in April 2020, but were interrupted by the pandemic. With the production now on its way for this spring, The Jamie Lloyd Company will also celebrate its 10th anniversary. So, the company can celebrate with new production and reflect on its past works, such as “Macbeth” starring James McAvoy and Claire Foy. The Company also produced “Betrayal” starring Tom Hiddleston, Zawe Ashton, and Charlie Cox. Most recently, “The Seagull” starring Emila Clarke ended its run at the Harold Pinter Theatre in London’s West End.

Production dates, theater, ticketing information, creative team, and additional casting for A Doll’s House will be announced soon. To sign up to receive the latest news about A Doll’s House on Broadway, please visit www.adollshousebway.com.