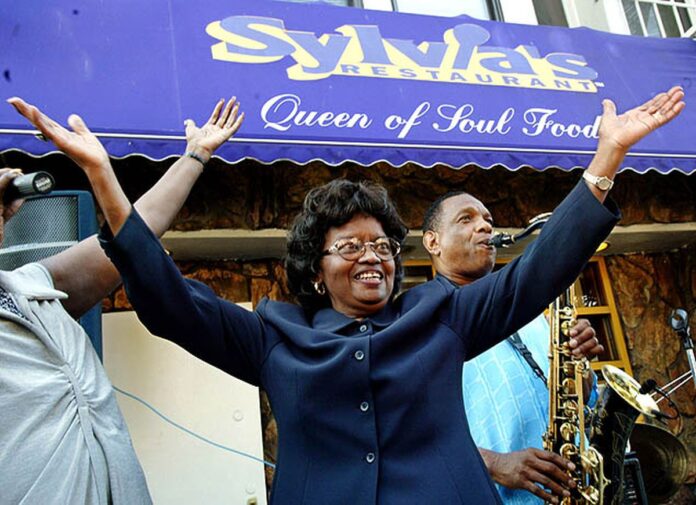 On Wednesday, Harlem Week paid tribute to one of its many diverse and renowned restaurants with a virtual tour of Sylvia’s Restaurant. Sylvia’s specializes in southern comfort food, serving legendary mouth-watering dishes and delicious drinks. Sylvia’s was started by Sylvia Woods, known as the “Mother of Harlem” and the “Queen of Soulfood.”

Born in 1926, Sylvia was raised in Hemmingway, South Carolina. When she was just three days old, her father passed away from wounds that he had received from fighting in World War 1. Sylvia moved to Harlem in 1944, marrying Herbert Woods, who she first met when she was only 11. She worked at Johnson’s Luncheonette until 1962, when she bought the restaurant for $20,000 with a loan from her mother, rebranding it into Sylvia’s Restaurant.

Sylvia was a mentor and cheerleader to her surrounding community until her passing in 2012. To this very day, her four children and grandchildren continue her legacy by running the restaurant and the Sylvia and Herbert Woods Scholarship Foundation, which has awarded $475,000 in college scholarships to students from Harlem. Her line of soul food products, as well as her two cookbooks, Sylvia’s Soul Food Cookbook (1992) and Sylvia’s Family Soul Food Cookbook (1999) were sold nationally. In 2014, the corner of West 126th Street and Lenox Avenue was named “Sylvia P. Woods Way” after her. Sylvia’s is immortalized as a location in the 1991 Spike Lee film, Jungle Fever.

Sylvia’s was cherished by Janet Jackson, Whoopie Goldberg, Bill (Who spoke in her memory at her memorial) and Hillary Clinton, Barrack Obama, Chris Rock, Nelson Mandela, Jennifer Lopez, Muhammad Ali, and Beyoncé, all of whom love the ribs, collard greens, chicken and waffles and legendary cornbread. In the video, Marcus Woods, Sylvia’s grandson, walks the producer, Alana Yzola, through the rib-making process, which he has been doing with his grandmother for as long as he can remember. Seeing is to believe how incredible the food is, watch the video here, or either visit Sylvia’s online or on 328 Malcolm X Blvd right by the Apollo Theater.

Lunch On Me Founder, LaRayia Feeds the Homeless with Organic Meals

House of Wise Seeks to Inform About Cannabis and CBD