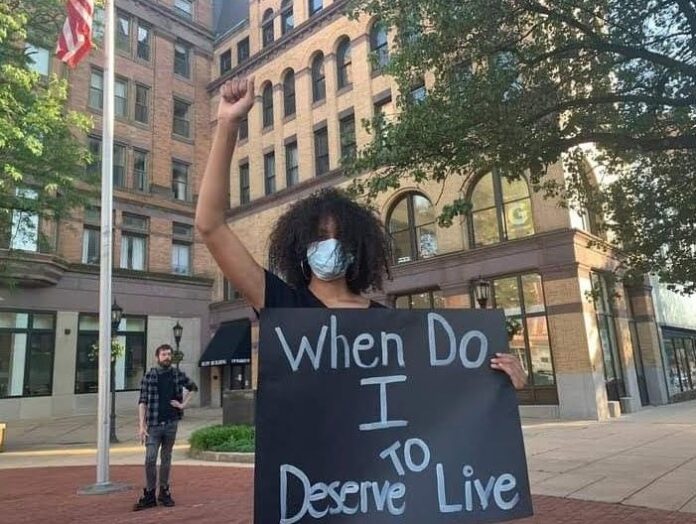 Briaunna Embrey-Banks is a student at York College of Pennsylvania (YCP) and is a Criminal Justice major while minoring in Creative Writing and African American Studies. She’s only ever attended one protest for Black Lives Matter (BLM) due to the pandemic, but she felt moved and empowered. She felt like she was a part of something big and as an African American woman, she felt accepted and cared for.

Banks may have only attended one protest, but that is not all she has done. She has created two public service announcements (PSAs). The first one is regarding racism, sexism, LGBTQ+, and stereotypes. The second one is directly related to the Black Lives Matter movement. As a creative writing minor, Banks has also written poetry about the BLM movement and her experiences with being a black woman. She was moved and inspired by her first protest to host an educational event on the York College Campus. This event will educate people on the BLM movement while also allowing students to share their writing and experiences.

What made you want to hold this Black Lives Matter event on the York College campus?

As a minority student, I have noticed that no matter how involved I am with this school, I still feel like an outsider. I felt as if most people didn’t take into consideration what it is like to grow up surrounded by few people who look like you; few professors, doctors, lawyers, people in higher positions who look like you. That idea of feeling like an outsider really grew as Black Lives Matter started to take fire in pop culture. The first thing I do when I wake up is to check my social media pages. Some of the first things I would see every day since BLM started trending are posts and statuses saying “Black Lives Matter is a terrorist group” and “If black people did not act like animals they wouldn’t get killed like them.” These posts were not made by random people on the web, I would see it from people who have known me since I was a child, friends, old schoolmates, current classmates, family.  It got to the point where I felt like I had a lot to say, and something needed to be done. I felt like the best place to make my voice heard is the exact place I felt like an outsider, YCP. I felt like a large problem surrounding the movement is ignorance, and I wanted to provide a safe place for students to learn.

What kind of information will be taught at this educational event?

What made you think to have student writers share their writing at the event?

I wanted this to be a “To Us From Us” event. YCP Students speaking to other YCP students. I felt like creative writing is another form of student voices that needed to be heard.

What are you looking for in the submitted writing? Any specifics?

Are there measures put into place to ensure that this will remain a safe space? Campus Security?

Five RAs will be at attendance at the event. If things become out of hand they will contact the necessary resources.

Briaunna Embrey-Banks is a passionate person about Black Lives Matter. She is hosting an event on the campus of York College of Pennsylvania to teach people about the movement. Banks is passionate about keeping people safe and feeling like they belong.

Heal the Hood Foundation of Memphis Under the Leadership of LaDell...

Best Self Co. Wants You To Think Bigger To Achieve Better