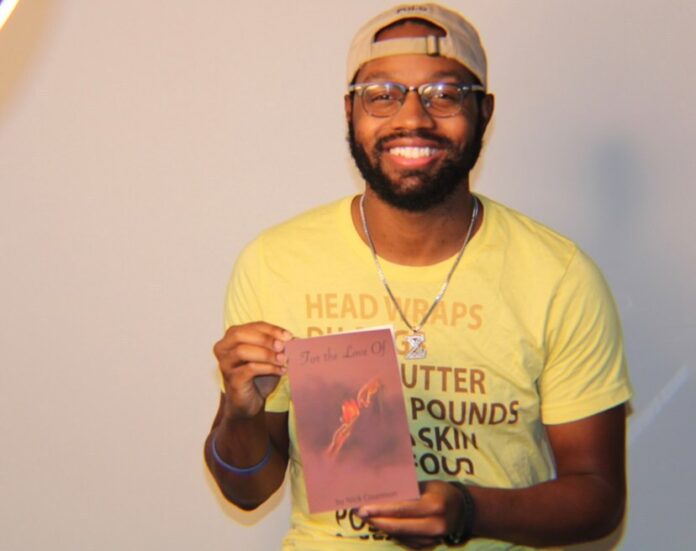 Books help some people see the world in a different light. From some, it’s through fiction novels, but for others, it’s through poetry. Nick Courmon, North Carolina Central University graduate student, is known for his various spoken word performances around some parts of North Carolina. At a young age, Courmon knew he wanted to do poetry. From watching his older brother reciting poetry at their grandfather’s funeral to listening to artist Tupac Shakur (including reading his book, “The Rose That Grew From Concrete”), Courmon grew as a writer and eventually into spoken word. Since the COVID-19 pandemic, it was clear that reciting oral poetry was going to be pushed back. The pandemic didn’t stop Courmon. Instead, it enlightened his goal to create and publish his first poetry book called “For the Love of.” The book is edited by CEO of Lost Voices Poetic Empire Andre Sansbury Jr. and illustrated by Essence Foster.

Courmon wrote “For the Love of” to acknowledge the different perspectives of the people he encountered during his undergraduate collegiate experience at The University of North Carolina at Pembroke. Before he released it as a book, it was just an online collection. Each poem takes on those observations that create titles like, “For the Love of Validation,” “For the Love of You,” “For the Love of Your Melanin,” and many others. “I’ll take on, you know, experiences that, not only that I’ve gone through, but you know, the experiences of my friends and family, and you know, articulate that on paper, and I won’t even necessarily have to put their name in it,” Courmon said.

He doesn’t shy away from using his skills to discuss racism. In each poem, parentheses are emphasizing each title to give a deeper meaning to the readings. For example, one of Courmon’s pieces states, “For the Love of My People,” then in parenthesis, it states, “Sugarcoating.” The poem talks about not sugarcoating racism. The last line states, “but the pain from [Black people’s] past has already been oversaturated with whiteness.” According to Courmon, issues of wanting Black people to sugarcoat racism aren’t surprising to him, and he refuses to have his voice silenced for the comfort of racists. “I can’t continue, you know, to allow myself to sugarcoat the truth … the people, you know, our ancestors, they were going through this,” he said. “These racist folks weren’t sugarcoating their feelings. They weren’t sugarcoating their actions … I should not need to sugarcoat how [the ancestors] felt.”

He also wrote a poem in memory of a young Black woman named Mary “Unique” Spears who was brutally murder by a man because she rejected his advances. The poem was titled “For the Love of Pride,” and in parentheses, it stated, “Tears for Unique.”

“For the Love of” had two components to make this book happen. Courmon thanks Sansbury, who edited the book and helped promote the book, and Foster, Courmon’s friend from grade school, for illustrating the front cover of the book with two hands reaching for each other while one is on fire. Courmon is a part of the Lost Voices Poetic Empire, and Sansbury told him that they would have a book out that started the production of “For the Love of.” Foster created the illustration after looking at the pieces Courmon wrote. He explains the illustration allows the readers to interpret what it means. “I was really, really rocking with the artwork, because, you can assume, you can guess, you can be like, ‘this is what I think it means or I think this is what the hands mean,’ but at the end of the day, nobody is completely wrong, because that’s how you interpret it,” he said.

During the pandemic, Courmon made it known that he didn’t want to get too caught up with how many books he sold. It was important to him to get the book out so that people can read it and relate to the poems from their own experiences. The perspectives helped to relay stories from others who may not have all the answers but can give insight to others who may be going through the same experience.

Courmon encourages more people who want to start poetry or spoken word to “just get started.” For him, even if the poetry isn’t shared with others, still practice the craft. “We have a habit of putting things on a pedestal and making things seem unachievable … you know, it might start off a little tough, but like, the point is, you’re getting started.” To purchase “For the Love of,” please visit Barnes & Noble. For more spoken word from Courmon, visit his Instagram at @ndc_poetry.