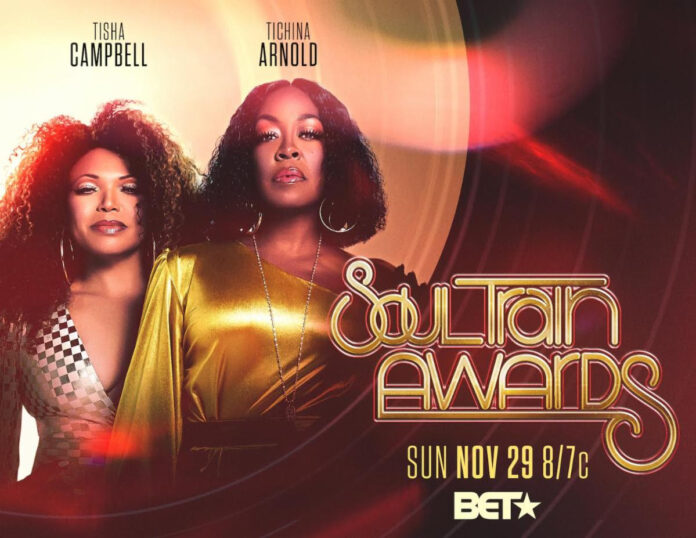 BET announces the hosts and nominees for the 2020 Soul Train Awards across 12 different categories. The annual celebration recognizes the best in Soul, R&B, and Hip Hop from both established industry legends and the next generation of promising artists. Taking place on Sunday, Nov. 29th, the 2020 Soul Train Awards, presented by BET, will simulcast on BET, BET Her, VH1 and MTV2 at 8 p.m. EST with a one-hour pre-show beginning at 7 p.m. EST, followed by the broadcast television debut of DJ Cassidy’s groundbreaking virtual series “Pass the Mic.”

Actor, singer, and writer Tisha Campbell (“Martin,” “My Wife & Kids,” “Last Man Standing,” and “Outmatched”) will once again join actor, singer, and writer Tichina Arnold (“Martin,” “Everybody Hates Chris,” “The Neighborhood,” and “The Last Black Man in San Francisco”) as host and co-producer of this year’s awards. The iconic best friend duo, both on the 90’s hit show “Martin” and in real-life, will return to the Soul Train Awards stage for the third time, bringing their dynamic comedy and infectious personalities to this year’s ceremony.

H.E.R. leads the nominees for this year’s awards, receiving eight nominations including Best R&B/Soul Female Artist and double nods in each of The Ashford and Simpson Songwriters Award, Best Collaboration, and Video of the Year categories. She is followed by Chris Brown, who received seven nominations including Album/Mixtape of the Year, Song of the Year, Best Dance Performance, Best Collaboration and Video of the Year for the hit single “Go Crazy” with Young Thug.

Beyoncé and Young Thug received six nominations, including Song of the Year and Video of the Year. Other top nominees include Chloe x Halle, Summer Walker, and Usher, with five nods each, followed by YG with four nominations. Brandy and PJ Morton round out the group with three nods apiece.

The 2020 Soul Train Awards presented by BET will feature an exciting lineup of unforgettable performances, including moments and appearances by some of the brightest stars in Black culture and entertainment. The annual event is committed to showcasing Soul Train’s impact on the art of music and dance from the ’70s to today.

Directly following the 2020 Soul Train Awards, DJ Cassidy will present the broadcast television premiere of his virtual series, “Pass the Mic,” on BET. The special will be a celebration of the most definitive, iconic, and prolific R&B classics of the 1980s. “DJ Cassidy’s Pass the Mic: BET Soul Train Edition” brings legendary musical heroes to the comfort of the audience’s living rooms around the world to dance hard, sing loud, and smile big.